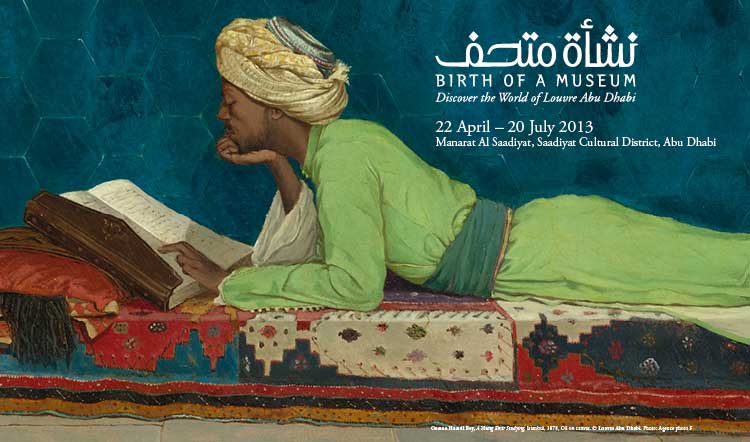 Birth of a Museum

Following Louvre Abu Dhabi’s first exhibition Talking Art: Louvre Abu Dhabi in 2009 which revealed some of the initial art works acquired by the museum, Birth of a Museum will be the first large-scale presentation of part of the collection of the Louvre Abu Dhabi giving a taste of its architecture and art works.

Birth of a Museum constitutes the first large-scale presentation of the Louvre Abu Dhabi collection, in unison with the expression of Jean Nouvel’s architectural vision. The exhibition unveils a selection of one hundred and thirty works, most of them never before seen. Its concept is based on the major artistic and aesthetic themes which reveal the principles at the core of the Louvre Abu Dhabi’s identity: universalism and the artistic testimonies of major civilisations brought together and in dialogue, from the most ancient times to the contemporary period, while emphasising the multidisciplinary nature of the fields of artistic creation. Mirroring the future museum, Birth of a Museum proposes a new and unique reflection on the history of art. As an introduction, the theme of the figure and its representation is presented in an archaeological context, while a concurrent dialogue is created with a modern work. The suggested echo between the Bactrian Princess, a Cypriot idol-statuette, and Yves Klein’s figural expression is a symbolic demonstration of the ongoing visual renewal of the key issues of human representation.