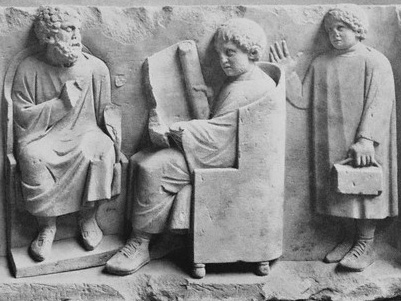 This postgraduate-run, interdisciplinary conference will look at the role of education in antiquity. The transmission of values, knowledge, and skills is inherent in every culture throughout antiquity. The Greco-Roman world, in particular, dealt with this issue from very early on, developing different answers in different forms (e.g. asserting educational values in great epic poetry, theoretical discussions on pedagogic principles, the creation of a didactic genre, and the composition of hand-book and school-book texts). A variety of authors and texts (from Homer to Vergil, from Aristotle to Horace) engaged in and responded to the challenge of educating future generations. Theoretical discussions, as Quintilian attests, and practical works (such as the various Artes Grammaticae or Seneca Rhetor’s Declamationes) were composed especially to meet educational demands. Indeed, the concept of paideia and the institutions of Greco-Roman education often influenced and shaped the reception of ancient texts, contributing to the selection of the works we still read today: in other words, ancient education also played an important part in the training of the Western cultural élite from at least the age of the Renaissance.

This conference aims to explore different aspects of teaching and learning in the Greco-Roman world and to examine the multiple strategies practised in the education of future generations. The conference also hopes to analyse how education shaped the reception of classical texts in Antiquity and beyond, and how the ancient notions and practices of education were understood, portrayed, and received in post-Classical eras.