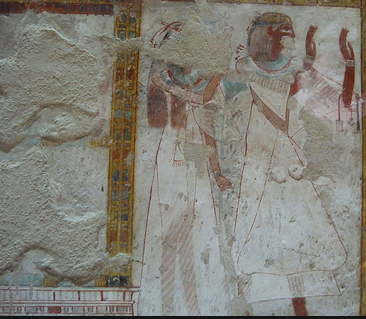 The beautiful, small tomb of Neferrenpet in Deir el-Bahari, opposite Luxor, was never finished
10 08 '18 09:50

Every Tomb Tells a Story

Dr. Melinda Hartwig (The Michael C. Carlos Museum at Emory University) will give a lecture entitled “Every Tomb Tells a Story”.

Neferrenpet was Overseer of the Storehouse of the Lord of Two Lands. His tomb’s funerary chapel is believed to date to the time of Amenhotep II from the 18th Dynasty. Originally dated by a single painted cartouche for that pharoah, this beautiful, small tomb in Deir el-Bahari, opposite Luxor, was never finished. Recently, Dr. Melinda Hartwig researched several unidentified figures discovered in the tomb’s funerary chapel. These paintings raised questions as to the age of the tomb, and whether scribes may have included representations of themselves in the tomb’s decorations.

Dr. Melinda Hartwig is the current President of the American Research Center in Egypt as well as Curator of Ancient Egyptian, Nubian and Near Eastern Art at the Michael C. Carlos Museum at Emory University. She has authored four books and a wide array of articles and has been an on-air spokesperson for National Geographic Channel, The Science Channel, The Smithsonian Channel, PBS, and the BBC. Her most recent book, A Companion to Ancient Egyptian Art (Oxford: Wiley-Blackwell, 2014), received the 2016 PROSE award.