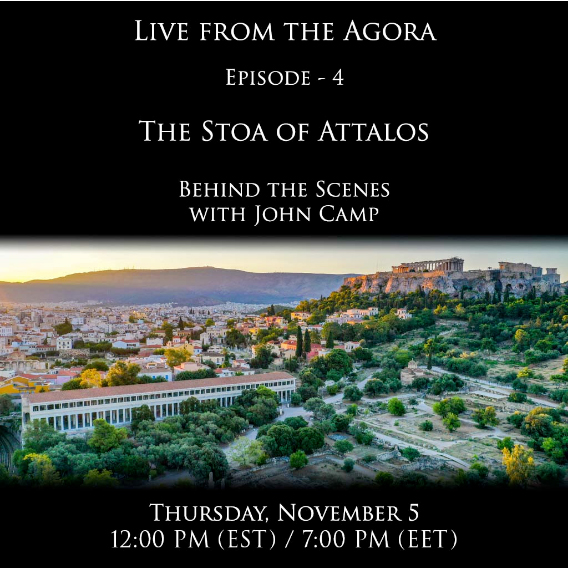 Website
Dr. Camp will tell the fascinating story of the Stoa of Attalos, discuss its discovery and reconstruction, and offer a unique and in-depth look at some of the most important finds on display.
04 11 '20 11:47

Live from the Agora – The Stoa of Attalos

Live from the Agora, Episode 4: The Stoa of Attalos

Presented by the American School

The American School invites you to join John Camp, Director of the Athenian Agora Excavations, for another inspiring episode of Live from the Agora. Dr. Camp will tell the fascinating story of the Stoa of Attalos, discuss its discovery and reconstruction, and offer a unique and in-depth look at some of the most important finds on display.

Originally built 2,150 years ago, the Stoa of Attalos is one of the most recognizable landmarks in the Athenian Agora. Marking the eastern limit of the city’s ancient economic and political center, the Stoa was constructed by Attalos, ruler of the Hellenistic Kingdom of Pergamon, who had come to Athens, like many before him, to study under the city’s famous philosophers. Excavations by the American School uncovered the building, which had found itself in use for a variety of functions over time. However, the history of the Stoa of Attalos far outlives its ancient past, as it was rebuilt in the 1950s to serve as the museum, research center, and storage spaces for the Athenian Agora Excavations.

John Camp is Director of the Athenian Agora Excavations at the American School of Classical Studies at Athens and the Stavros Niarchos Foundation Professor of Classics at Randolph-Macon College. He holds an A.B. in Classics from Harvard University (1968) and an M.A. (1972) and Ph.D. (1977) in Classical Archaeology from Princeton University. Dr. Camp is regarded as the foremost expert on the topography of Athens and Attica. His long association with the American School’s Athenian Agora excavations dates back to 1966 when he joined the staff as an excavator. He continued as Agora Fellow in 1972, then as Assistant Director from 1973, and has served as Director since 1994. He was also the School’s Andrew W. Mellon Professor of Classical Studies from 1985 to 1996. Dr. Camp has published and lectured widely, and he has received many awards and honors for his work, including the Aristeia Award for Distinguished Alumni/ae of the American School.