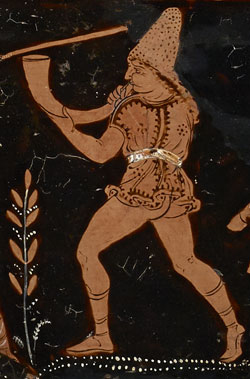 The Monumental Vases of Ancient Apulia

Richly decorated with complex imagery and narrative scenes, large figure-decorated vases of the 4th century B.C. found in Apulia (southeastern Italy) served as proud statements of identity. A number depict figures in local dress, indicating the distinctive ethnicity of the Apulians, while others draw upon Greek tragedies and point to a deep, sometimes abstruse, interest in Greek myths and theatre. In a lecture entitled “Imagery and Identity: The Monumental Vases of Ancient Apulia” archaeologist Thomas Carpenter examines these vases and the Apulian funerary assemblages in which they were found to shed light on an otherwise little-known people.

This program complements the exhibition Dangerous Perfection: Funerary Vases from Southern Italy on view at the Getty Villa through May 11, 2015.

Thomas H. Carpenter is the Charles J. Ping Professor of Humanities and professor of classics at Ohio University in Athens, Ohio. His specialty is ancient Greek archaeology, religion, and iconography, and holds degrees in both theology from Harvard University and classical archaeology from Oxford University. He is the author of numerous articles and books including Art and Myth in Ancient Greece, which has been translated into six languages, and Dionysian Imagery in Fifth Century Athens. Most recently he co-edited the book The Italic People of Ancient Apulia: New Evidence from Pottery for Workshops, Markets, and Customs.