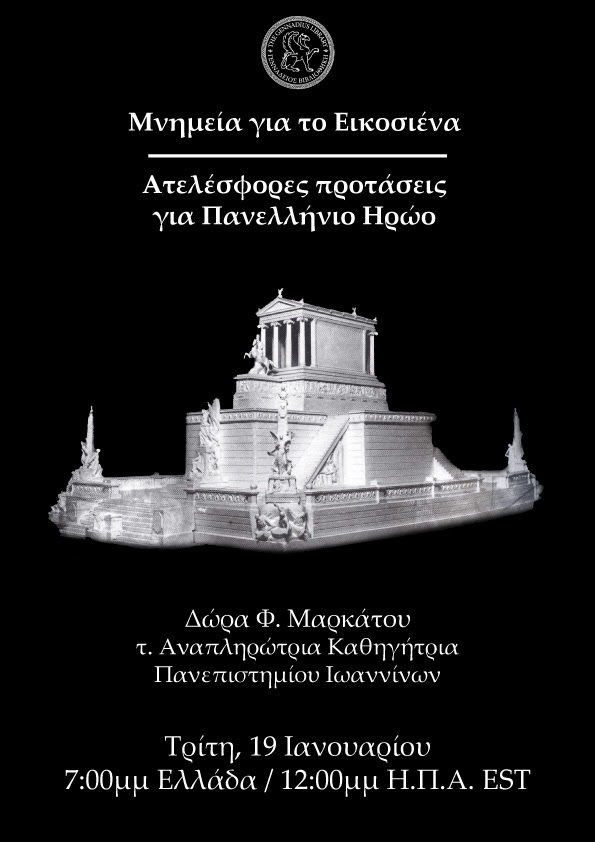 Monuments for 1821: Fruitless Proposals for a Panhellenic Heroon

The Gennadius Library presents “Monuments for 1821: Fruitless Proposals for a Panhellenic Heroon” on Tuesday, January 19, 2021. This webinar will be presented in Greek. Please scroll down for English descriptions of the presentation.

The issue of expressing gratitude to the actors of the liberation of the nation through the construction of monuments arose even before the establishment of the Modern Greek state. Despite extensive consideration, few heroa were erected in the 19th century. Interest picked up in the context of the celebration of the 50th anniversary of the Greek Revolution in 1871. The issue was rekindled during the Balkan Wars and especially during the Interwar Period, for the celebration of the Centenary of the Greek Revolution, which was postponed to 1930. The debate centered on a Panhellenic Heroon, which, despite endless discussions, was never constructed. After introducing the heroa of the 20th century, this presentation will focus on the efforts to erect a Panhellenic Heroon. Emphasis will be placed on the proposal of the sculptor Georgios Bonanos (1863–1940), a work of “architecture-sculpture” that remained in the planning stages, but is of great interest because it reflects Modern Greek ideology. Its sculptural decoration captures all Greek history from the Fall of Constantinople to the Balkan Wars, with overt references to the Great Idea.

Dora Markatou was born in Cephallonia. She studied at the School of Philosophy of the University of Athens and continued her studies in Art History at Heidelberg University. She completed her doctoral thesis entitled The Sculptor Georgios Bonanos (1863–1940). His Life and Work at the University of Thessaloniki with a scholarship from the State Scholarship Foundation. She first worked in Public Secondary Education and then in the Department of Theatrical Studies of the University of Patras and in the Department of History and Archaeology of the University of Ioannina, where she rose to the rank of Associate Professor. She has also worked with the Hellenic Open University as a professor and coordinator of the “Greek Culture – Arts 1” section. Today she is an unpaid Curator of the Korgialenio Historical and Folklore Museum of Argostoli. Her research interests include the history of sculpture, with emphasis on public and burial sculpture, the history of art of the Ionian School (18th-19th century), women’s artistic production, etc.