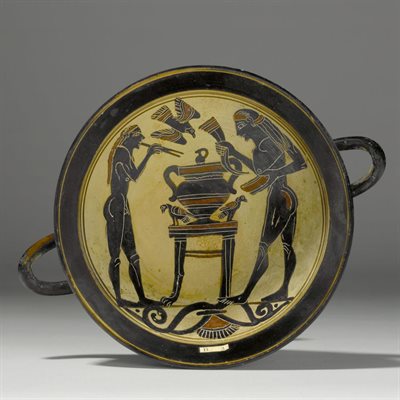 Music in Ancient Sparta is the subject of this Sparta Live! event, hosting Dr. James Lloyd (University of Reading).

Dr. Chrysanthi Gallou (CSPS Director) and Dr. Petros Doukas (Mayor of Sparti) will welcome Dr. Lloyd to discuss the wide range of evidence on Spartan music and the Spartan mirage. There will also be a live demonstration of how Spartan music might have sounded.

Like much of ancient Greece, Sparta’s festivals resounded with the sounds of citizen choruses and the music of visiting professionals. Its laws and principles were captured by the songs of Tyrtaeus, and its social customs and mythologies were hymned in the works of Alcman. Later writers would attribute important innovations in music to the musicians who competed at Sparta’s early contests.

However, the predominant image of the music in ancient Sparta is one of music and military (the Spartans were noted for marching into battle accompanied by music) and of extreme musical conservatism (a number of musicians had the strings of their instruments cut off by the Spartan authorities, so we are told). Yet what of these images is real, and what can be attributed to the Spartan mirage?

This talk will introduce listeners to the wide range of evidence we can draw on to answer that question (including the earliest known Hellenic aulos). The lecture will conclude with a live demonstration of how Spartan music might have sounded.