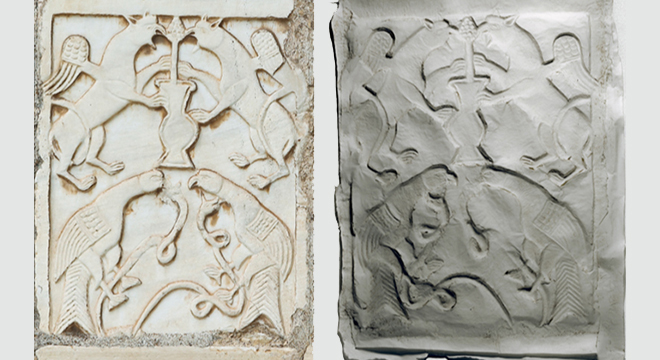 The architect and artist Nora Okka exhibits 33 examples of her work alongside lithographs and drawings of books from the collections of the Gennadius Library and photographs and sketches from the Archives of the Benaki Museum.
10 09 '19 11:35

The Gennadius Library is pleased to present Spolia: Transcripts of the Stones of the Little Metropolis / Spolia: Μεταγραφές των λίθων της Μικρής Μητρόπολης, opening September 10, 2019 in the Ioannis Makriyannis Wing. In this show, the architect and artist Nora Okka exhibits 33 examples of her work—22 squeezes of relief sculpture from the Little Metropolis and 11 squeezes of inscriptions on its reused blocks—alongside lithographs and drawings of books from the collections of the Gennadius Library and photographs and sketches from the Archives of the Benaki Museum.

The Byzantine church known today as the “Little Metropolis” of Athens (Μικρή Μητρόπολη) incorporates many reused old blocks dating from the fourth century B.C. up to the Middle Byzantine period itself. As the archival and library material demonstrates, the building was noticed by early modern travelers, artists, and scholars alike. Most of its spolia are panels from Early Christian and Byzantine iconostases, and the rest are Greek and Roman tombstones, inscriptions, and architectural elements. The reuse of old stones removed from their original context, or spolia, is a ubiquitous and natural consequence of architecture in durable stone, but the Little Metropolis is extreme both quantitatively and qualitatively: it was built chiefly out of spolia and evinces a clear aesthetic program for that reuse.

A “squeeze” is a piece of thick paper that, after being moistened and carefully beaten into a stone’s nooks and crannies with a boar’s-hair brush, dries into an exact model of the stone’s surface. Normally used to produce a portable representation of an inscription, the squeeze (έκτυπο, estampage, Abklatsch) has been a tool of epigraphic research for almost two centuries. Nora Okka deploys a uniquely refined version of the scholarly technique of squeeze-making for her own artistic and conceptual ends.

In her work, Nora Okka takes interaction with spolia to a new level: the multilayer squeezes can be viewed closely as three-dimensional objects and in continually new combinations and arrangements. In presenting transfigured representations of the reused stones of an enigmatic Byzantine monument, the exhibition asks us to consider the relationships between documentation and imagination, surface and depth, originality and reuse, antiquity and modernity, abstraction and materiality.

The exhibition opens on Tuesday, September 10, 2019, with a lecture in Cotsen Hall at 7 pm by Professor Manolis Korres of the Academy of Athens (“Αναχρησιμοποίηση λίθων. Ναός Παναγίας Γοργοεπηκόου”) followed by a reception in the gallery of the Gennadius Library’s Ioannis Makriyannis Wing. Another lecture by Professor Dale Kinney of Bryn Mawr College will address the issue of spolia more broadly (“Spolia: Programmatic, Enigmatic, Problematic”) on Tuesday, October 29, at 7 pm.

* The lecture will be Livestreamed. Please click on the play button bellow to start watching or click HERE.

The exhibition will remain in place until November 2, 2019, and will be open to the public on:

Nora Okka’s multidisciplinary creative practice blends the roles of artist and architect. She creates spaces, objects, images and exhibitions through which she develops and critiques architecturally theoretical and curatorial frameworks.

Her academic and creative research into the ancient practices and the contemporary legacies of spoliation, has resolved into a series of artworks and exhibitions that demonstrate and examine the concept of spolia as a micrographic constitution of architecture.

The constitutive doubleness of her research activities generated a unique adaption of the epigraphers practice of making ‘squeezes’, a traditional method for making translation study aids. Her inventive multi-layered squeeze process creates direct and indexical impressions of architectural fragments from the remote past that engender a more emotional translation. In her own words “it seeks to be interpreted and experienced as a symbolic reconstitution of authentic spolia, but also as a performative continuation of the practice of spoliation”.

She has been awarded various grants and scholarships for her research and has been the recipient of generous support from the Greek State Scholarships-, the A.G. Leventis-, the Basil and Elise Goulandris-, the Alexandros S. Onassis- and the Stavros Niarchos Foundation.

She is currently Director’s Visitor at the Institute for Advanced Study in Princeton, where she focuses her research on the manifestations of the practice of spoliation on the city of Venice.