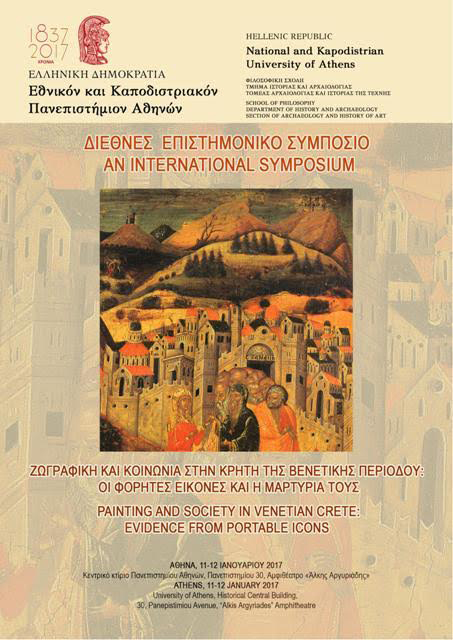 Painting and Society in Venetian Crete: Evidence from portable icons

Scholarly interest in the painting of portable icons produced in Crete during the later periods of Venetian rule of the island (14th-17th c.), has been remarkable, reached its heyday in the last decades of the 20th century, and continues. The relevant activity has produced extensive new evidence, has generated new thinking and has broadened the field of Byzantine and Post-Byzantine painting and the study of art in areas of the Greek East under Venetian rule.

This Symposium aspires to address the broader issue of the relationship between painting and society, focusing on research on portable religious icons created by Cretan painters, the study of them, and the discovery of any kind of evidence that these works of art and cult can provide about the place, time and circumstances in which they were produced.

The Department of History and Archaeology and the Office of the Dean of the Faculty of Philosophy of the National and Kapodistrian University of Athens accepted the proposal and approved the funding for the realisation of the Symposium. The Rector Prof. M.-A.K. Dimopoulos, the Vice-Rector for Academic Affairs and International Relations Prof. K. Bourazelis and other institutional representatives of our University, the Chairman of the Department of History and Archaeology Prof. P. Valavanis and the Director of the Section of Archaeology and History of Art Prof. E. Mantzourani expressed their support for the idea of its organisation.

The Symposium forms part of the anniversary celebrations for the 180 years of functioning of the National and Kapodistrian University of Athens, and is the fi rst scholarly event for the year 2017 to be realised within this framework.