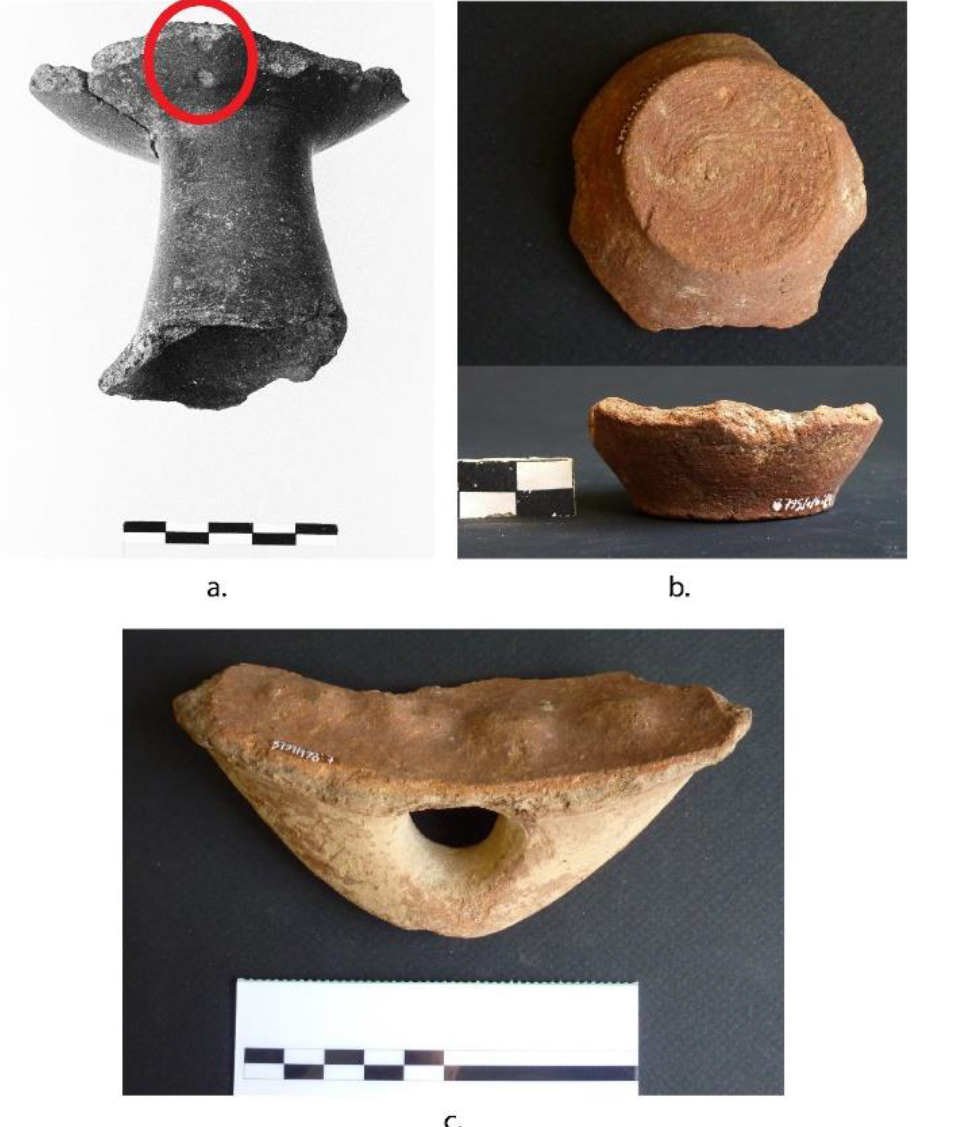 Website
Examples of some aspects of local production on MC vessels from Area B. a) Local goblet showing potter’s mark; b) wheel-coiled handleless cup showing grooves from removal from the potter’s wheel on the base; c) jar handle showing raised nubs at the interior, remnants from the push-through attachment of the handle.
01 06 '18 12:04

Pottery Production and Interaction in the Middle Bronze Age Cyclades

This Cycladic Seminar will be presented by Natalie Abell, Assistant Professor at University of Michigan. It is entitled “Pottery Production and Interaction in the Middle Bronze Age Cyclades. A Perspective from Kea”.

How Cycladic communities participated in exchange, and how they were impacted by their interactions with other societies in the wider Aegean over time are two of the main questions driving research in the islands during the Bronze Age. A particular emphasis has been placed on analyzing facets of the so-called Minoanization phenomenon, during which islanders adopted and adapted Cretan ways of doing things. Although this phenomenon started in the later Middle Cycladic (MC) period, the majority of research has focused on the Late Cycladic (LC) phases of the phenomenon. Indeed, the MC period in general has generated rather less scholarly interest than the LC (with exceptions, of course). Yet, the MC period presents a variety of interesting archaeological problems. While the later MC provides insight into the initial stage of Minoanization, the earlier MC is marked by the development of new socioeconomic strategies after the disruption and apparent economic and demographic decline of the later Early Cycladic period. The earlier MC also witnessed the first stages of interaction between Cycladic communities and emerging power centers elsewhere in the Aegean, both on Crete and Aegina. The earlier MC, therefore, also provides a crucial background for contextualizing what kinds of things did and did not change as part of the earliest phase of Minoanization.

AyiaIrini on Kea provides an opportunity to explore the dynamics of exchange and interaction in the Cyclades during the MC period. The town was a major exchange hub, owing in part to its strategic position at the intersection of maritime routes that connected diverse parts of the Aegean to each other and to the metal-rich region of Lavrion. Recent study of published deposits, combined with new analysis of unpublished ceramics from Area B at the site, has enabled a reevaluation of how ceramic import, production, and consumption patterns changed over the MC period. As part of this study, a particular emphasis has been placed on how local production methods and techniques changed over time, since these may represent different kinds of connections between Keians and the wider Aegean than imported objects do. The presentation summarizes the key features of these analyses and highlights some of the idiosyncrasies of the ceramic assemblage at AyiaIrini in comparison with other Cycladic sites, in order to explore how and why they may have developed.