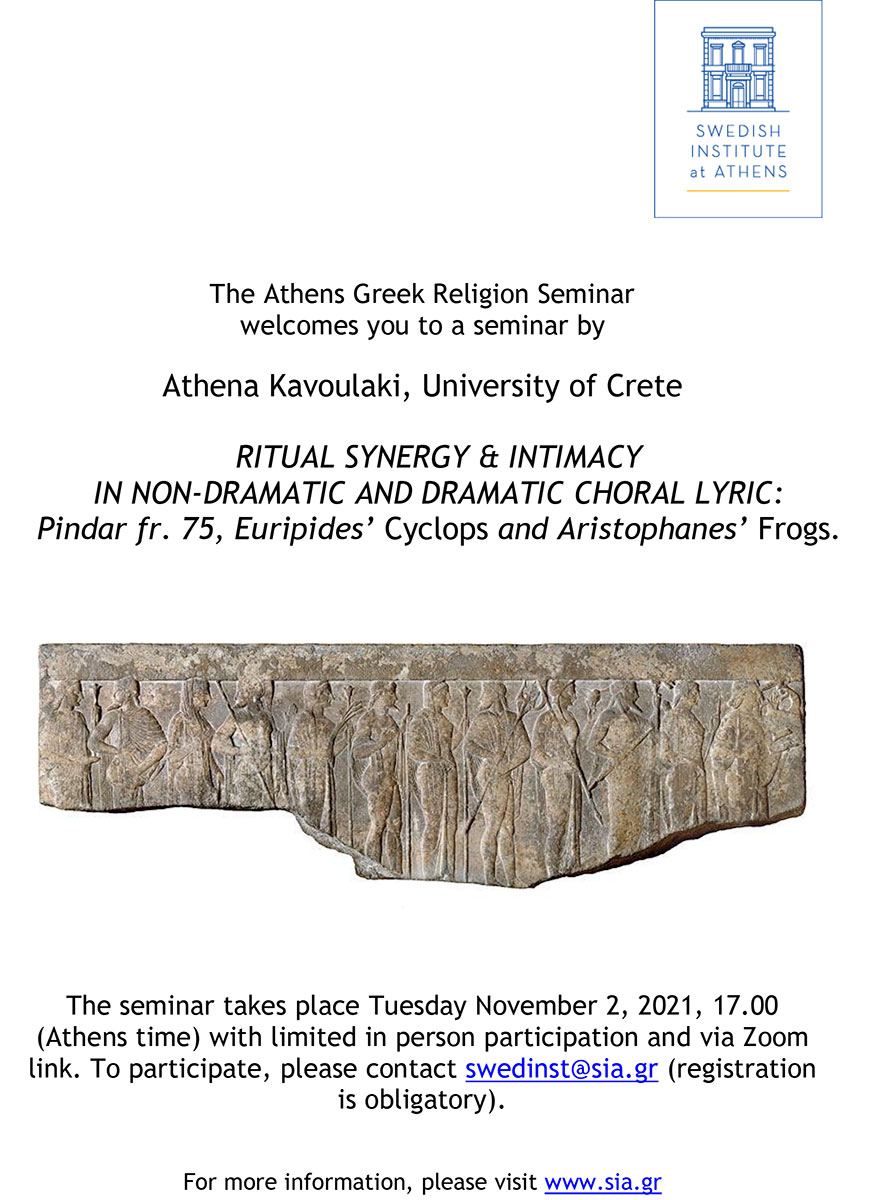 In Archaic and Classical Greece choruses performing choreia (song and dance performed
by a group) played a pivotal role in the festivities and more broadly in the ritual
activities of the Greek communities. Excluding sacrifice in the strict sense, all stages of
the various festival practices could feature choral activities. This emphatic presence of
choruses cannot be explained away in a simple or singly unifying way. The interaction
between song and context is complex and multilateral, and every insight that can be
gained from an investigation of the surviving material can add to our understanding both
of the poetics of the choral material and of the cultural form and significance of ritual
events.

In my paper I would like to focus selectively on choral songs that seem to be
related to the ritual complex of the heorte (festival) and more particularly to its initial
stage, i.e. the stage of the pompe. My attention will be drawn to some characteristic
surviving instances of songs incorporating motifs that are relevant to the broader ritual
pompic context which enables linearly progressive movements (with a ritual destination)
combined with stationary, circular ones. In my analysis I will draw attention to the
chorus’ capacity to explore the potential of the initial ritual practices and to rework
poetically its place in the heorte. The discussion will include various means that the
chorus employs (patterns, motifs and artifices expressed in performative language or
imagery), so that in the new reworked environment agency can be broadened, in the
sense that human and superhuman (or non-human) agents can be harmoniously engaged
in the action. By employing such means the choruses seem to set up a process of
interaction with the gods in the direction of implicating the gods in the choral action
and even inscribing the gods in the body of the performing group, enhancing a sense of
embodied communication and community between mortals and immortals.

My test case will be the famous prelude of a Dithyramb for the Athenians
composed by Pindar (fr. 75 S-M) for a historical Dionysiac feast in Athens. This
historically-enacted choral instance will be (briefly) juxtaposed and correlated to two
dramatic examples of choreia, namely Aristophanes’ Frogs and Euripides’ Cyclops. In
the passages to be discussed the ritual, space-traversing event enacted or thematized
seems to be so orchestrated, as to activate a flow of mutual ‘liking’ between the agents
involved (mortal and immortal) and to enhance a sense of intimacy and reciprocity that
turns the whole choral undertaking into a synergetic achievement.