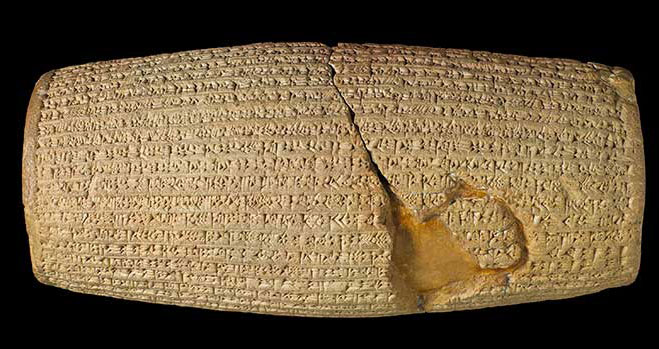 The Cyrus Cylinder and Ancient Persia

Modest in scale and appearance, the Cyrus Cylinder is one of the most important and iconic objects in world history. The origins of this baked clay object, which was buried as a foundation deposit, can be traced to the Persian king Cyrus the Great’s conquest of Babylon in the sixth century BCE. It bears an inscription, written in Babylonian cuneiform, that claims Cyrus’s victory over the last Babylonian ruler, Nabonidus. Also in this text, Cyrus declared religious freedom for his newly conquered people. He encouraged Jews to return to Jerusalem and build the second temple, which earned him the title “shepherd of God” and even the “Lord’s anointed” (Messiah) in the Book of Isaiah. Although the Cylinder was not discovered until 1879, Cyrus’s support for religious tolerance has inspired generations of philosophers, rulers, and statesmen—from ancient Greece to the Renaissance, and from the Founding Fathers to leaders in the modern-day Middle East.

On loan from the British Museum, this remarkable object makes its US debut at the Sackler. It is shown with a number of key items that offer insight into the religious, cultural, and linguistic traditions of the vast and powerful Achaemenid Empire (539–331 BCE) founded by Cyrus the Great.

The Cyrus Cylinder and Ancient Persia: A New Beginning is organized by the British Museum in partnership with the Iran Heritage Foundation and the Arthur M. Sackler Gallery, Smithsonian Institution. The exhibition is supported by an indemnity from the Federal Council on the Arts and the Humanities. Major support for the Sackler’s presentation is provided by the Leon Levy Foundation.