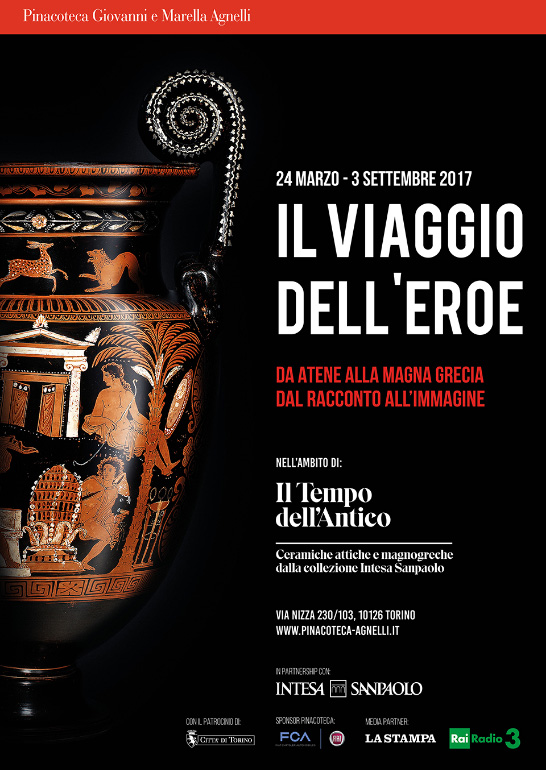 The Pinacoteca Giovanni e Marella Agnelli continues the examination around the theme of collecting and for the first time presents an exhibition on archaeology. The hero’s journey, curated by Federica Giacobello, is a show about the heroes of Greek myths depicted on the rare vases of Intesa Sanpaolo collection of Attican and Magna Grecian pottery. An adventurous wander into myth and history.

The vascular images tell the quite intricate mythical story of the Greek hero and his fulfillment in Magna Graecia. A noble warrior, the hero became the role model for the aristocracy in the Greek colonies in Italy, who populated, between 5th and 4th century BC, the depictions of vases according to the heroic ideal. An iconography based on the perfect body shaped by athleticism, the valour in battle and the defeat of death through social recognition and memory.

The first section is about The Hero in the Mythical Realm focusing on the ideal figures documented in literary and figurative production: the founding and civilising hero, like Heracles and Theseus; the Homeric hero, with Achilles’ and Ajax’s greatness; protecting heroes like The Dioscuri and tragic heroes like Orestes and Neoptolemus.
On the other hand, the second section explores The Hero in the Human Realm analysing the emulation of the heroic model in the Greek and Magna Grecian aristocratic warrior. From his athletic training to his setting out to battle, to his triumphant return, the warrior was hailed like a hero. As well as death sealing the warrior’s status as a hero.

This collection was put together by Giuseppe Caputi, an archdeacon who around 1830 started collecting the fine decorated vases emerged from the excavation undertaken in Ruvo di Puglia and produced in Athens, Lucania and Apulia. His work was carried on by his nephew Francesco Caputi.

In the last century, the collection was moved to Rome and from there to Milan, and was known by the name of “Collezione H.A.” – from Hydria Attica, the famous kalpis depicting potters at work. Towards the end of the 1990s, these precious painted vases became part of Banca Intesa artistic heritage and since then have been subject to restoration, study and scientific cataloguing.

This exhibition is part of the project Time of Antiquity, which aims at bringing Intesa Sanpaolo collection of Attican and Magna Grecian pottery to the general public.
The exhibition outfitting was designed by Marco Palmieri, the catalogue published by Marsilio.

The exhibition is organised in partnership with Intesa Sanpaolo.