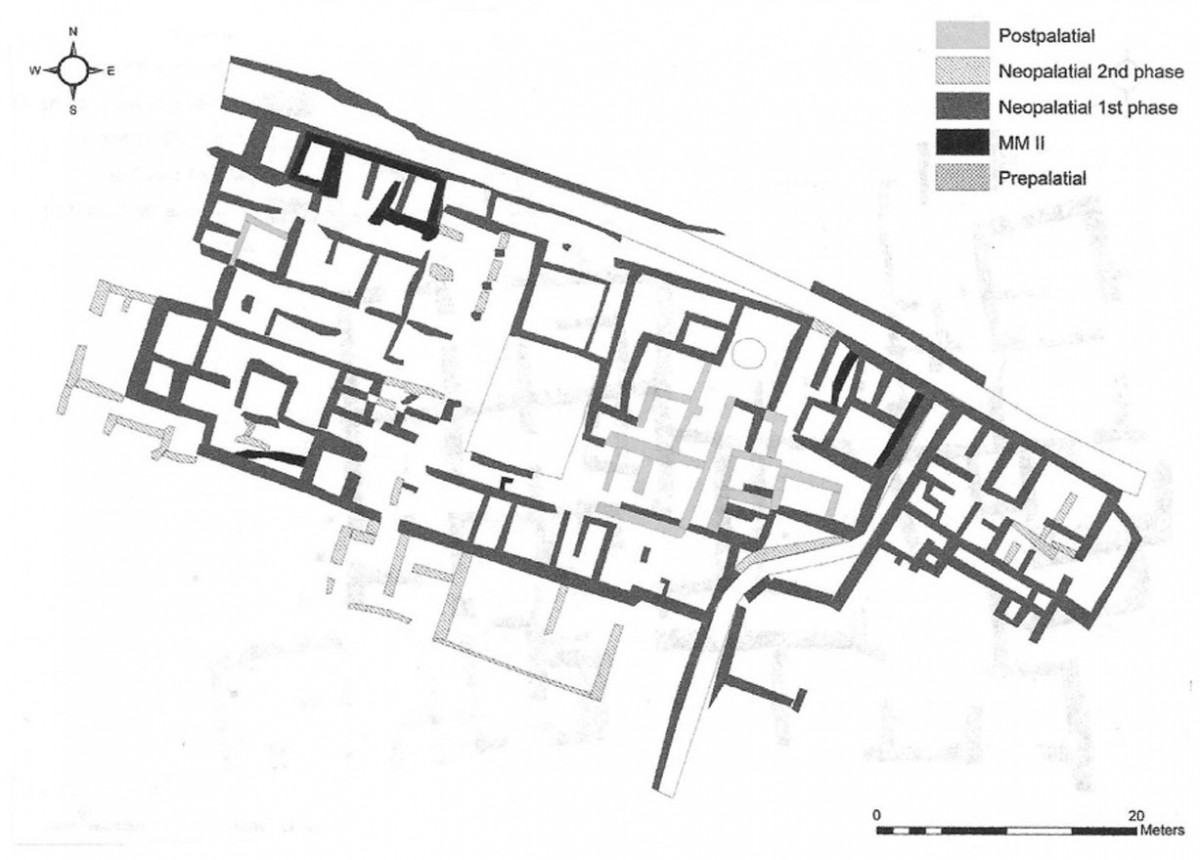 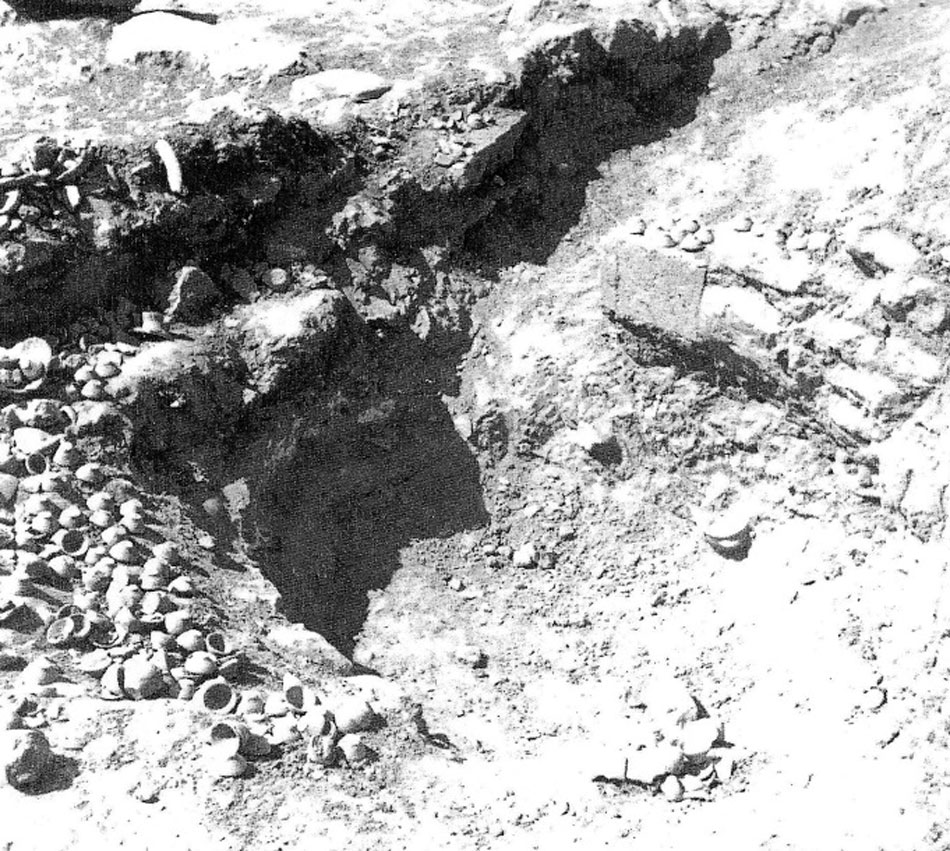 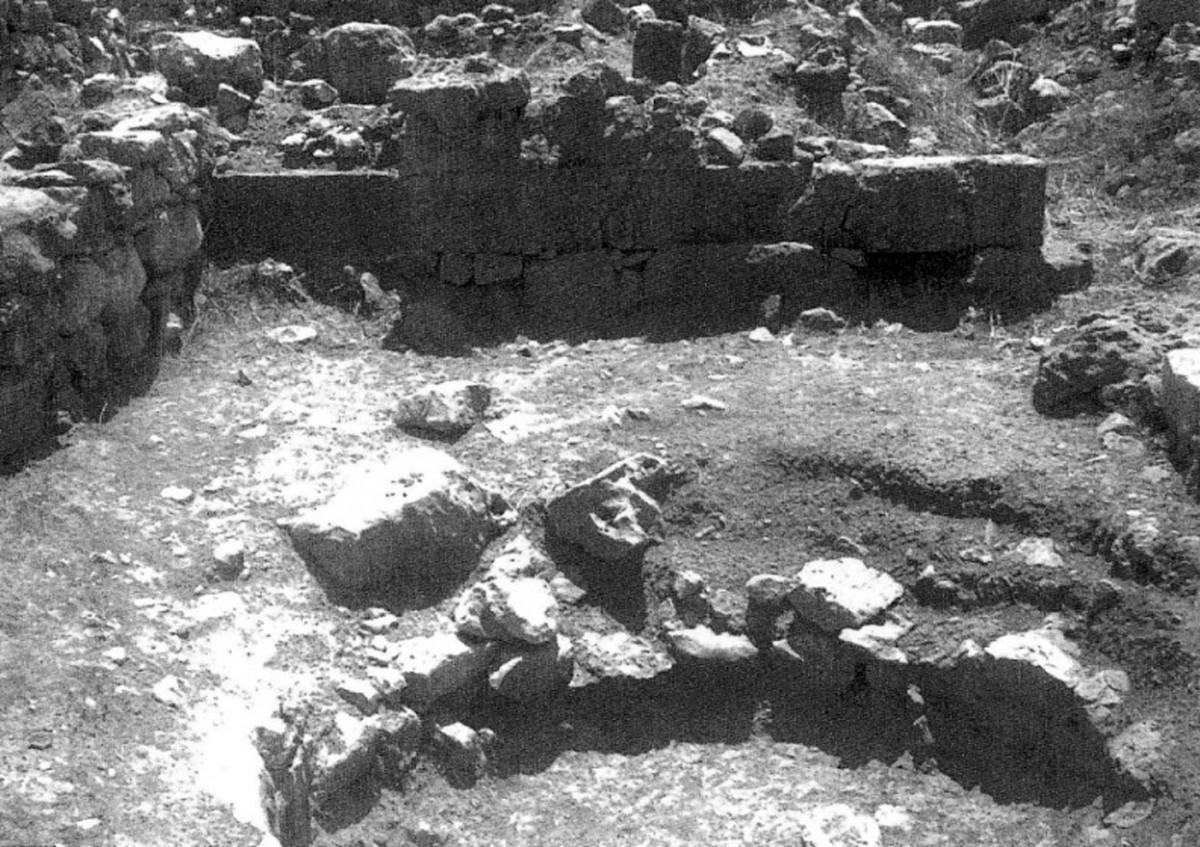 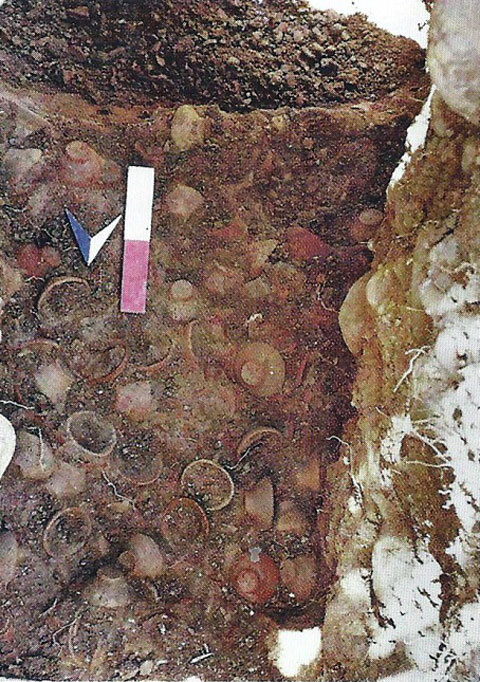 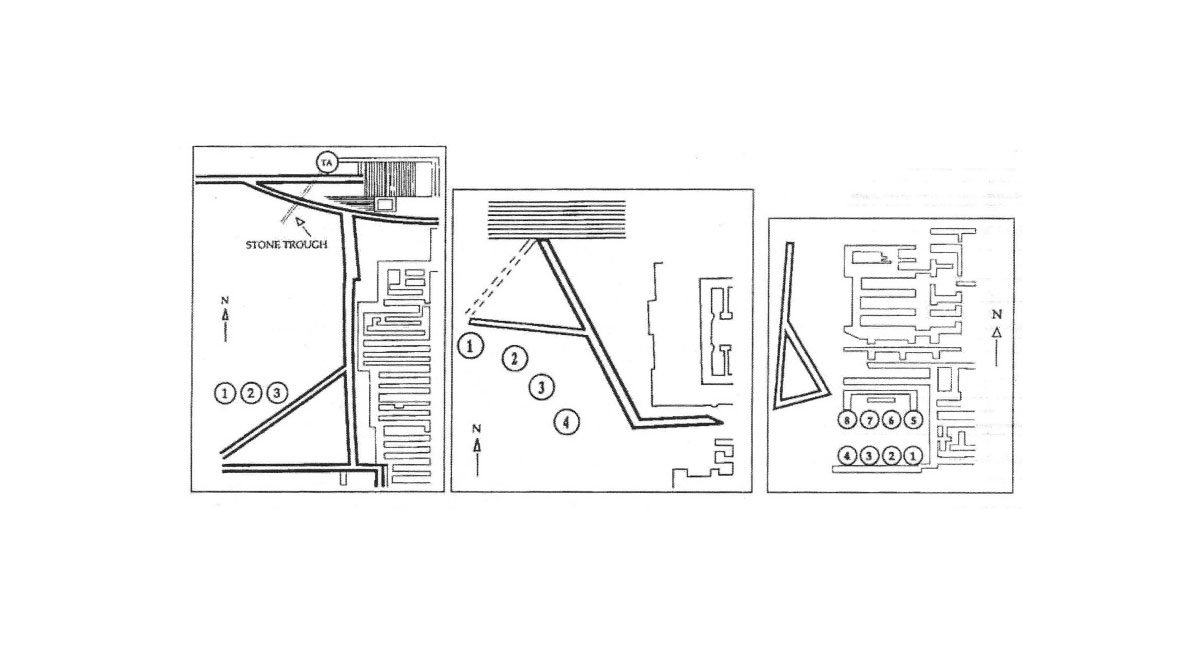 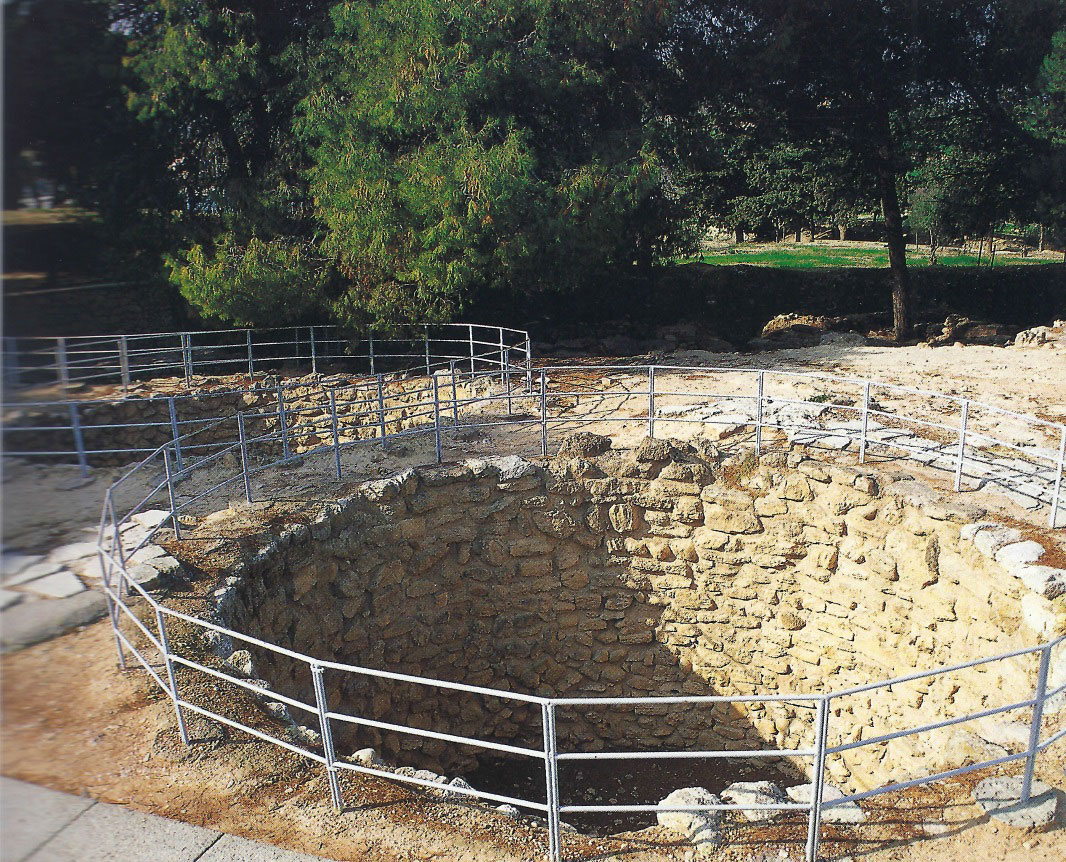 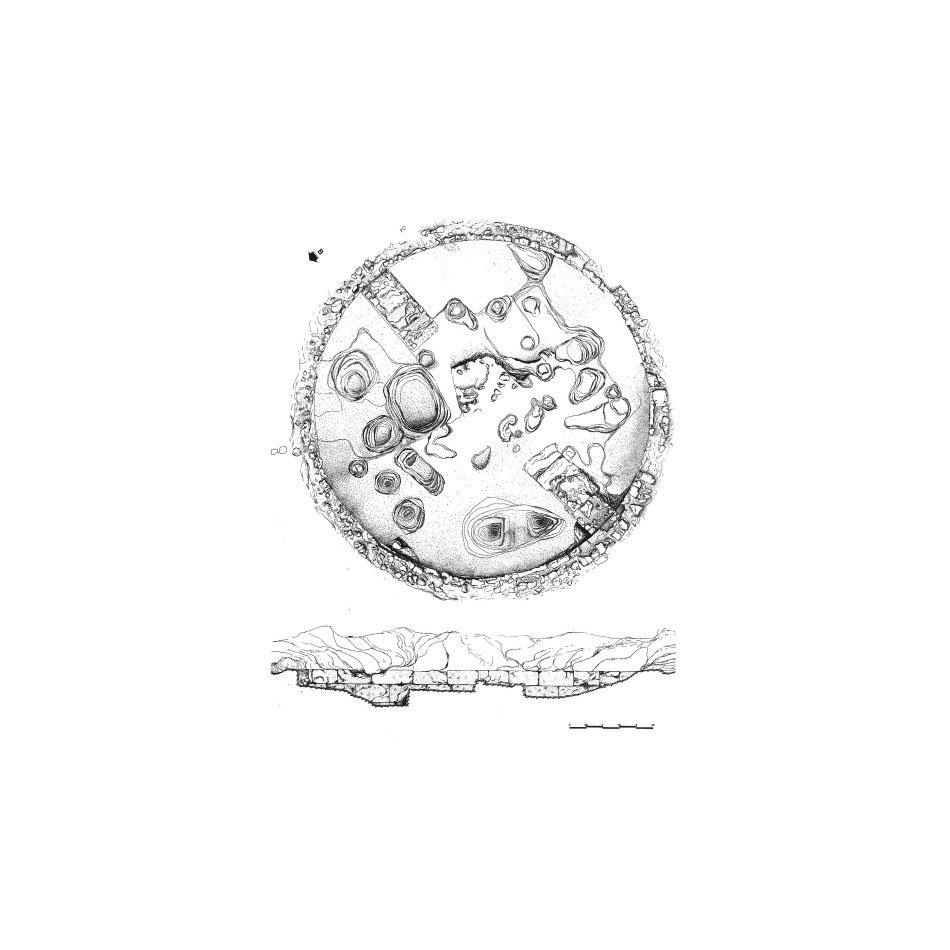 The “Kouloura” in “Maison Epsilon” at Malia

The “Kouloures” in Minoan “palaces”. Refuse pits or ritual deposits?

The “palace” of Malia is situated on the low rocky outcrop of a small coastal plain, at the foot of Selenas. Its prestigious position secured communication with the fertile Cretan hinterland and the trading sea routes of the time, since directly north, there was a natural harbor that had been important during the Bronze Age. The quarters of the walled Minoan city, whose name cannot be identified with certainty, extend a small distance from the “palace”, while the necropoleis are found further north, near the coast. The first “palace” is founded around 1900 BC on a site with older remains of settlements and has a life span of almost two centuries. The new “palace” is built around 1650 BC, on the ruins of the old one,generally following its plan while after its destruction in about 1450 BC ,it is reclaimed for a short period (Driessen 2010b, Apostolakou n.d.).

In the west part of “Room 37”of “Maison Epsilon”, accessible from “Rue 1” via steps or a ramp, a built and mortared pit was revealed −a “Kouloura”− with a diameter of 2.50 m and a depth of 0.75 m (Bradfer-Burdet 2005, p. 40).Excavators describe it as a refuse pit, stressing that it contained a multitude of complete or fragmented conical cups without handles, the majority of which go back to the MM III-LM IA period (Deshayes/Dessenne 1959, p. 109, Bradfer-Burdet 2005, p. 40). Bradfer-Burdet (2005) also seems to agree with this interpretation, adding that this particular “kouloura” (figs. 2, 3) could originally have been used to store grain like the circular constructions above ground in the “palace”. Driessen, on the other hand, compares it with the LM IA “ritualistic” deposit pit at Nopigeia in Kisamos (Ανδρεαδάκη-Βλαζάκη 1991-1993, 2011, Hamilakis/Harris 2011, Παπαδάκη 2014, pp. 199-212, Χαμηλάκης 2015, pp. 202-207), arguing that its content is related to sympotic events remembered collectively and is tangible evidence of the long “biography”of “Maison Epsilon” (Driessen 2010a, σ. 50-51). This opinion, associating the specific “kouloura” with the process of “producing a mnemonic testimony in situ” (Χαμηλάκης 2015, p. 203), is reinforced, in our view, by the following.

The above speculations regarding the “kouloura” in “Maison Epsilon” are registered in the issue of the function of circular pits with stone inner walls (Ζώης 1997, p. 151), found in the west courtyards of the three well known Minoan “palaces”, Knossos, Phaistos and Malia (fig. 5). As noted by Ζώης, the specific structures have been through many adventures in terms of their bibliography, given the effort of understanding them in the light of a universal interpretation (Ζώης 1997, p. 151). Is it possible, however, that each case is different despite their apparent similarities?

It is typical that  the “kouloures” in the southwest corner of the Malia “palace”, that are above ground, coated with mortar, with a central pillar, differ primarily regarding their architecture, dating and possibly their function from those of the Knossos and Phaistos “palaces” (see Strasser 1997, pp. 78-79 with concise bibliography, Bradfer-Burdet 2005, pp. 43-47). Moreover, most scholars agree that their design specifications are best suited to the theory that sees them as granaries (Pelon 1980, pp. 221-226, Strasser 1997, pp. 78-79, Bradfer-Burdet 2005, p. 43-47).  This same interpretation, however, is also proposed for the earlier, underground circular constructions in Knossos and Phaistos, possibly open and, more importantly, not waterproof, which are in fact the starting point for theories concerning various economic models (Branigan 1987b, pp. 247-249), that have been questioned,nevertheless from time to time (Strasser 1997, Hitchcock 2000, p. 64). The same, however applies to the remaining interpretations which, for more than a century, exhaust themselves in “recycling” both the daily-practical aspect and the ritualistic-religious side of these mysterious constructions’ function, when respective excavation data remains, for the most part unpublished (fig. 6).

Thus from the time that Evans (1935, pp. 61-66) described the “kouloures” of Knossos as blind shafts/collectors of surface waters or places for gathering refuse from smaller piles inside or outside the “palace”, most scholars accept the use of these specific constructions as reservoirs (see among others  Marinatos/Hirmer 1960, p. 64, Hood 1961, p. 223, Chapouthier/Demargne 1962, p. 17-19, 38, Graham 1962, p. 44, Cadogan 1976, pp. 53, 112, Pelon 1980, pp. 221-226, Branigan 1987b, p. 248 and 1988, pp. 64-66, Marinatos 1987, pp. 136-137, Moody 1987, p. 236, Warren 1987, p. 50, Wiener 1991, p. 332). Along with their prevalent interpretation as granariesthat has been discredited with convincing arguments, in our opinion, mainly by Strasser (1997, for a recent discussion on the topic see Christakis 2011, p. 199), Alexiou has argued that they may have functioned as “sacred deposits” where “empty vessels were ultimately thrown and other remains of offerings that took place in the sanctuaries of the palace” (Alexiou 1983, pp. 159-160). He believed that the proximity of the Knossos “kouloures” to the altars in the West courtyard was anything but random, as well as finding animal bones inside some of these and pieces from offering tables made of clay or mortar (Alexiou 1983, p. 159, also see Marinatos 1987, p. 135, note 9). Preziozi, on the other hand, relying mainly on pictorial evidence such as the wall painting of the “Sacred Grove”, assumes that these circular constructions were used to plant trees to be used as wind breaks (Preziozi 1983, p. 85). In the same spirit, Carinci associates the location of the “kouloures” with the ceremonial, “processional routes” in the west courtyards and their adjacent “theatrical areas”. He stresses that, in the case at least of the Phaistos “palace”, the presence of trees arranged in the “kouloures” would strengthen the possible symbolic role played by adjacent structures such as a reservoir or hearth, connected with the worship of the natural elements (Carinci 2001).

Last, the proposal made by Lipa is particularly interesting (2007, pp. 242-250) re-examining the ritualistic function of the “kouloures” in relation to the ancient Greek “megara” and “thesmophoria” (fig. 7). She notes that the west courtyards of the “palaces” were out door ceremonial places and transitional areas of controlled public activity between them and the city (Lipa 2007, p. 346 with concise bibliography). She herself compares the fragmented ceramics in the “kouloures” with the ritual destruction of wine drinking vessels during celebrations of the Mysteries, while supporting her interpretation with examples of ethnography (Lipa 2007, pp. 245-249 with concise bibliography).

There are, in fact, examples of “thesmophoria”, those of Pella being the most typical (fig. 7), that correspond to underground, circular, built pits, sometimes coated with mortar and painted white on the limits of cities or immediately outside their walls and in direct contact with constructions of a sacred nature, such as temples, enclosures and altars (Λιλιμπάκη-Ακαμάτη 1996, p. 19 and note 5, pp. 22, 25 and note 24-28 with examples and a relevant bibliography, pp. 26, 104).

Sometimes they contain layers of soil, rubble, animal bones and fragmented utilitarian pottery (Λιλιμπάκη-Ακαμάτη 1996, pp. 23-24, 105), creating an excavation impression resembling what Evans refers to as unrecorded deposits of earth, rubble and fragmented pottery, which he located in the second “kouloura” at Knossos and described as“rejects”? (Ζώης 1997, pp. 151-157). It is worth noting that Macdonald also connects the “kouloures” at Knossos with ceremonies associated with the harvest (Macdonald 2005, p. 45, see also Μαρθάρη 2008). This specific research acquires additional interest if we take into account the fertility character of Minoan religion. Could the multitude of conical cups without handles, inside the “kouloura” of “Maison Epsilon” at Malia, be interpreted in this light?

In any case, the “kouloures” remain an issue open to research. Furthermore, till the complete publication and comparative study of their content and architecture, no proposed interpretation can either be wholly accepted or rejected.

This article is a summary of a chapter of my doctoral thesis on “Ceramic deposits: conceptual determination, methods of formation, typology and importance in the life of communities in Crete of the 2nd millennium BC”. Sincere thanks to my professor Lefteris Platon for his valuable help in all the stages of research. Also, to Kleanthis Sidiropoulos for his comments, Athanasia Kanta for our always interesting discussions and Anthony Vassilakis for granting me visual material from his book on Knossos.

NOTES
1. Hamilakis notes that the cups in the deposit at Nopigeia “were not physical metaphors for the social and collective, but rather embodied in a material form a concept of social intercorporeality. Drinking in particular was carried out as an act of collective personalization within the wider, corporal landscape” (Χαμηλάκης 2015, p. 205). It is also characteristic that the phenomenon of hoarding remains of symposiums in pits is encountered in various European cultures, in prehistoric and historic times (see Pitt 2005 with concise bibliography).