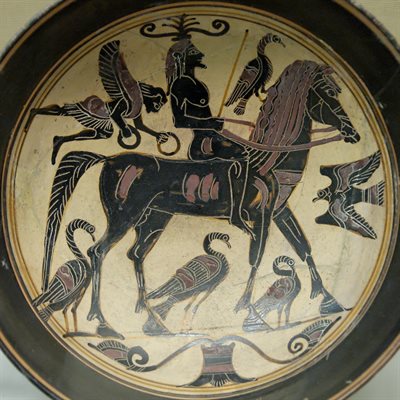 “Warlike Spartans? Competing memories on Spartan militarism” is the subject of the next Sparta Live event, a lecture by Dr. Elena Franchi, December the 10th, 5-6 pm. (UK time).

On the eve of the Peloponnesian war, the Spartans had to decide whether to launch an offensive attack or not. King Archidamus advised them to be warlike but also wise, and to wait for the right moment, as their ancestors had done on other occasions; the ephorus Stenelaidas instead argued that it was necessary to act immediately, in a manner worthy of Sparta. Both invoked, more or less directly, continuity with the past.

But were the Spartans historically warlike or prudent?

In her lecture, Dr. Elena Franchi will explore Spartan history by examining the situations in which the Spartans were belligerent and those in which they were more prudent. S (hippeus), attributed to the Rider Painter from Laconia (c. 550-530 BC) he will show that on the eve of the Peloponnesian war there were two competing memories on Sparta at war: one portraying them as more πολεμικοί, the other as more σώφρονες. She will also try to understand what purposes these memories served.