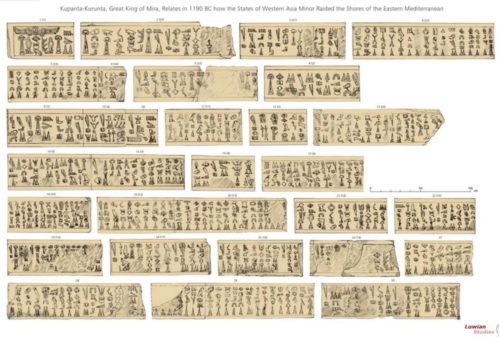 News about the rediscovery of a long-lost inscription in a long-lost language referring to a Trojan Prince circulates the internet since last week, and not without a reason.

Direct references to places known widely through both myth and archaeology (without these two essentially correlating), princes and wars, extinct languages and nations lost forever under the sands of time, all consist catchphrases for a community for whom archaeology as a discipline is always interlocked with the longing of bringing to life stories of glorious individuals and the series of unfortunate events that dramatically led to their demise.

Publicity, as a magnifying lens, gradually transformed the content of the news; in a couple of days the “3,200 – Year- old Stone Inscription tells of Trojan Prince, Sea People” was seen as  “Luwian Hieroglyphic Inscription Explains the End of the Bronze Age”. Still, what is important in this piece of news is not related to Mediterranean History but the history of archaeological material management as well as heritage journalism.

The first to seek for is whether the inscription actually enlightens us on the end of the Bronze Age. The text actually tells the story of how two subsequent kings of a city-state called Mira had secured their control over the nearby city of Wilusa (Ilion aka Troy) by overthrowing and then reinstating its king in exchange for his loyalty. The text, dating in around 1190 BC.  is important in mentioning two persons related to Troy; king Walmus and a Trojan prince called Muksus who led a victorious campaign against the coastal city of Ashkelon (in modern day Israel) and set a fortress there. The reference to Ashkelon is the only bit that connects the inscription with the Sea Peoples phenomenon.

Overall, the information given could be seen as a story which is important within the context of the period’s history but not as a key incident that “explains the end of the Bronze Age”.

Secondly, it is interesting to notice is how this piece of info came to us and who transmits it. In a closer look at one of the first (thus less bound to impress) news reports we see that:

a. The original inscription does not survive as the slabs, it was engraved on had been allegedly used for the building of a mosque short after the first copy had been completed.

b. The text reached the current researchers through a copy of a copy of the original; the first copy was allegedly made in 1878 and was recopied in some undefined date in the third quarter of the 20th century by a team of researchers who never published it. The inscription finally seems to somehow be included in the archive of Near Eastern archaeology expert James Mellaart.

c. The mid 20th c. experts names are nowhere to be found, while it is mentioned they died before 1985. James Mellaart also died in 2012. What makes things trickier is that Mellaart had been accused as one of Archaeology’s greatest fraudsters; he had been accused of faking finds at Çatalhöyük, while he was banned from exercising archaeology in Turkey due to a case involving the location of a treasure known as the Dorak affair (1965).

The result is that there is no evidence that the inscription which modern experts boast to have rediscovered is genuine as there is no reference to it that predates Mellaart. In what extent, then, we had to marvel at something that may have never existed? Possible for the dimension the story gives to the “publish or perish” saying. This is because, in our case, it was not only the team of experts that perished as they did not publish according to time but the credibility of their find as well.