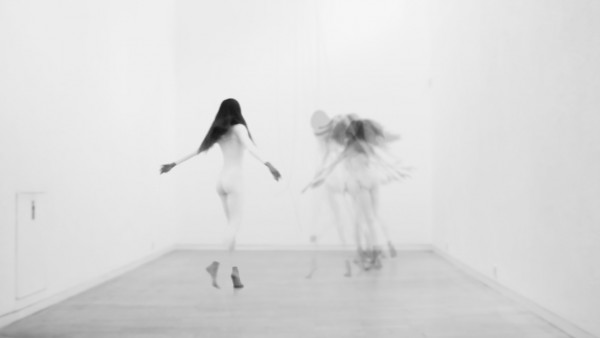 The history of Santorini in relation to its active volcano and its inhabitants’ recent memory of the terrific earthquake of 1953 have created a particular cultural and environmental relationship between each body and its potentially violent ambience. Catastrophes are often identified with impetuous, dense and massive sounds. Continuing to use Santorini’s caldera as a ‘natural amphitheater’ for live or technically mediated auditory (re)presentations, the Santozeum museum will host the Aural Lighthouses symposium from May 18 – 23, 2015, and exhibition from May 18 – June 8, 2015, curated by Ileana Drinovan, as a part of the ‘PSi 2015: Fluid States – Performances of UnKnowing’ cluster of events across the world. Aural Lighthouses will examine the role of human aural performance in making disaster sounds seem natural and fade into a perceived inaudibility.

by Gabriella Daris and Gustav Metzger

Dancing Tubes Interventions is a respiratory kinetic installation that bridges the conceptual ideas of two artists. It consists of Gustav Metzger’s Dancing Tubes (1968/2014) and two interventions by Gabriella Daris (2014/2015): (a) addition: live dancing within the installation and (b) reduction: the veiling of the sound source. Using Pythagoras’ acousmatic technique, Gabriella Daris focuses on the effect that the pressured air and its sound has upon the hyper-objects of the tubes and upon the dancer; a conflation of human and mechanized dance ensemble that raises enquiry in the audience as to both the sound source and its ontological register as well as its allusive echo.  Manipulated by atmospheric pressure, her ethereal body is in constant strife to dance in harmony with the unpredicted frenetic dancing of two tubes that hang from the ceiling and are connected to an air compressor; set on a timer, it activates them for one-minute long with a ten-minute interval of silence and stillness. The sound score is here part of the repertoire recalling the violent force of the element of air, the art of respiration towards the inevitable death rattle and the system of autopoiesis. Dancing Tubes Interventions explores the poetics of liminal space and sound by dancing in-between.

Produced by Square Knot with kind support from Santozeum museum.

On May 19th Gabriella Daris will dance live with the tubes over the course of three hours. This will be followed by an artist talk in which she will explore Gustav Metzger’s notion of Auto-Creative Art and Auto-Destructive Art, her dramaturgical approach to deconstructing his writings (1959-1999) as well as her ambiguous application of the Pythagorean Veil.

On May 20th Gabriella Daris will lead a laboratory inviting the audience not only to interact with the installation but to also experiment with different notions of seeing, hearing, and of hearing unseen sounds as they are made visible, challenging their psychophysical situation by means of exploring the implementation of destruction by the natural element of air to a level of fetishization and in reach of transcendence. Experimental artist Julian Hand will perform live light projections using watercolors on slides, creating a lava-like environment that recalls Gustav Metzger’s Liquid Crystal Environment (1965).

Δημοφιλή Blogs
Raiders of the Lost Ark: ten facts you might not know
by Ζέτα Ξεκαλάκη
What was Indy's original (and deeply dull) surname?
Take a closer look at Psyche Revived by Cupid’s Kiss
by ptsinari
Watch this multimedia feature of the Louvre to take a closer look at this masterful composition.
Αρχείο Blog
2022
2017 (1)
2015 (1)