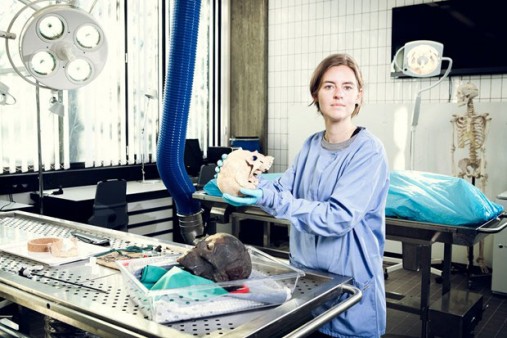 In an interview given by the archaeological geneticist Christina Warinner to the Guardian, we read that it’s a good thing our ancestors didn’t floss their teeth! For archaeologists, at least. Calculus or plaque is continually in contact with the mouth and the digestive and respiratory tracts. The plaque contains the remains of many bacterial species that inhabited the mouth and nasal passages, as well as immunological proteins associated with inflammation and infection. It’s like a time capsule. The amount of DNA is astounding. The geneticist finds 1,000 times more DNA by weight in fossilised calculus than in bone.

Each sample contains hundreds of millions of DNA fragments, which come from 2,000 to 4,000 species of bacteria. By sequencing the DNA and looking for the parts that overlap the scientists can gradually map the genes that pathogens use to attack our cells and evade our immune system. That should allow them to investigate the long-term evolutionary history of human health and disease, right down to the genetic code of individual pathogens, and it should allow them to reconstruct a detailed picture of the dynamic interplay between diet, infection and immunity that occurred thousands of years ago.

Plaque can also tell us what sorts of plants were being consumed at the time. Many of the genetisists’ samples date from Germany in the medieval period when Arab traders were beginning to introduce new grains and fruits to Europe.

Δημοφιλή Blogs
Raiders of the Lost Ark: ten facts you might not know
by Ζέτα Ξεκαλάκη
What was Indy's original (and deeply dull) surname?
Take a closer look at Psyche Revived by Cupid’s Kiss
by ptsinari
Watch this multimedia feature of the Louvre to take a closer look at this masterful composition.
Αρχείο Blog
2021
2012 (1)