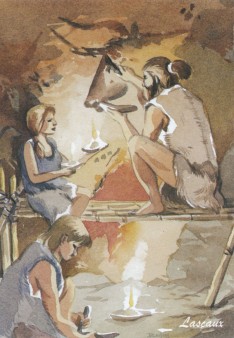 This image comes from a postcard released in France in relevance to the local (there) Lascaux cave archaeological site. From a first glance, there is just a beautiful and somehow naive picture of an imaginary past. But is it just that?

Not exactly. What caught my eye is that, contrary to the crude, “ape-like” posture adopted in mainstream depictions of prehistoric people, in this postcard, the people are “humanized”. The postcard’s artist has imagined the main cave painting creator as a tall slim man who retains his beard and long hair. After all, why couldn’t he be just like that? He is a Homo sapiens, just like us, not a Neanderthal or any other hominid. Secondly, the figures who help him are a young woman and a child, both equally slender and tame-looking. This is also a departure from what we normally see in “popular archaeology” representations of cave people, where gender roles are set in accordance to much later examples of ancient societies. Still, there is little evidence that cave artists were exclusively men and, more than that, that their helpers were also adult men. In that sense, this postcard’s artist has offered us an updated version of the way we see our distant forefathers.

Δημοφιλή Blogs
Raiders of the Lost Ark: ten facts you might not know
by Ζέτα Ξεκαλάκη
What was Indy's original (and deeply dull) surname?
Take a closer look at Psyche Revived by Cupid’s Kiss
by ptsinari
Watch this multimedia feature of the Louvre to take a closer look at this masterful composition.
Αρχείο Blog
2020
2019 (1)
2018 (1)
2017 (1)
2016 (1)