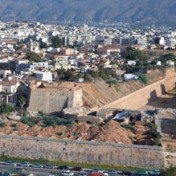 A network of fortifications in the making

An archaeological delegation from Chania, Greece is considering a proposal to join a network of cities with tower fortifications as a key element. The delegation, headed by M. Andrianakis (director of the 28th Ephorate of Byzantine Antiquities, Chania and president of the Scientific Committee for the Promotion of Cretan Fortifications), recently took part in the one-day conference “Fortified Cities: preservation and development” which was held under the auspices of the Province and the Archaeological Authority of Aquitaine, in Bordeaux, France. As for the proposal, the action plan contains the initiative by the city of Chania to organize a. a conference on fortifications during 2011, b. an exhibition on fortified cities in France in comparison to Chania and c.  a presentation of the recent conservation/restoration works at the city’s medieval walls. The city of Chania authorities are also willing to include their city of Venice counterparts in their cooperation plan with French authorities. Thus, they aim to materialize a complete action plan for promoting fortifications as a common European heritage.
Your text here…