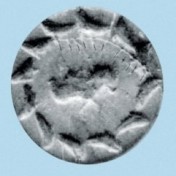 Did the Minoans discover the Solar Calendar?

Your text here…“An unusual sealing pattern of cavities”. This is the way that the late Yannis Sakellarakis characterized the pattern of a 2200 BC seal he had found forty years ago in Archanes, Crete. But, according to the researcher Minas Tsikritsis, the seal may be the key to decipher the Minoan dating system!
According to Dr. Tsikritsis, who is a researcher fascinated with Minoan Hieroglyphs, the seal forms proof that the Minoans had effectively used the solar calendar, so far believed to have been discovered by the Babylonians, and they had divided their year in 12 months. Sakellarakis’ find consists of 12 strokes surrounding a sign of irregular shape, reminding of Crete. This, according to Dr. Tsikritsis is indeed the island of Crete, while the twelve strokes represent the year’s months. “Observing the Winter Solstice as well as the Moon’s phases and by making notes, the Minoans would have found out that the Sun, during its rise, would have taken the exact same position it had reached 365,3 days before”.
Mr Tsikritisis, a fan of Eucleides and Pythagoras, is researching so far undeciphered Minoan scripts for the past 20 years. He has written a book on the Phaestos Disc while he insists he has found the key to decipher Linear A through an inscription found also in Phaestos a few years ago.