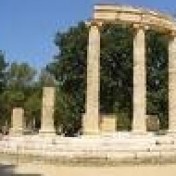 Olympia is getting green again

Four years after the horrific fire that destroyed a large part of the woods famously surrounding the archaeological site of Olympia, the “Sacred Altis” is getting green again…

A site plan for the restoration of Olympian greenery is ready to materialize, predicting the creation of a 9-acre garden full of trees and plants known from ancient sources. Pausanias, Xenophon and Theophrastus have included in their works a handful of botanical descriptions, which will be the base for Olympia’s “regeneration”. 24 species described in the ancient texts will be received from local plant vendors and florists to enrich the gardens with 400 treees, 6000 bushes and 3000 other plants. The plan is under the aspices of the (local) Z Archaeological Ephorate and the archaeologist G. Lyrintzis.