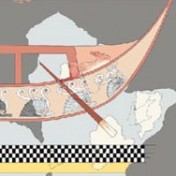 New evidence on the image and use of Mycenaean ships as well as further info on Mycenaean iconography has been simultaneously brought to light by archaeologist and conservation specialist dr. Harikleia Brekoulaki.

Dr. Brekoulaki worked on the 20.000 wall-painting fragments meticulously collected in 200 boxes in the Palace of Pylos by the team of the late C. Blegen during his 1939-1965 excavation.  Only in 2000 the boxes were opened and from 2005 onwards Dr. Brekoulaki worked on how to reconstruct a puzzle dismantled since the 13th c. BC.

The results paid back her work. The image that came out was a procession of three ships, while another vessel was reconstructed later. They were all part of the decoration of Room 64, thought to be a vestibule to a main room which served as the Throne Room during the Palace’s first phase. All ships were designed to demonstrate the power of the King’s Fleet. One of the ships was decorated with “nautiloi”, probably an emblem, while all of them have oars, a residence area on their deck and a rudder. Their size suggests that in reality they would be 10 m. long, able to sail the Mediterranean, for trade or for war. The see where they flow is depicted reddish – agreeing likewise with the Homeric descriptions of the sea during the sunset and suggesting the cultural continuity between the Mycenaean and early Iron Age Greeks. Also of importance was the technique used in the wall-painting. Unlike the Minoans, who created frescoes, here the paintings have been created using egg, and thus connecting with techniques used in Egypt.

Dr. Brekoulaki’s conclusions will be presented in a special conference dedicated on Mycenaean wall-paintings – “Mycenaean Wall-Paintings in Context”  – on Saturday 12 February at Cotsen Hall, ASCSA.