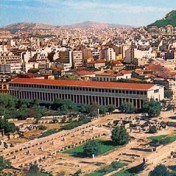 A digital walk in the Ancient Agora of Athens

The digitization of the entire archive of the excavations of ASCSA in the Ancient Agora, Athens, as well as the renovation of the Attalos Stoa which characterizes the site, is scheduled to start shortly.
So far, 56 sculptures housed in the Attalos Stoa, which functions as a museum, are under conservation while a museological study on the re-exhibition of sculptures in the Stoa’s first floor is also in progress.
Meanwhile, the 1st Ephorate of Prehistoric And Classical Antiquities as well as ASCSA, as the state authoritiesinvolved in the general plan, are to announce a contest regarding the companies involved in the archaeological material digitization.
Upon its completion, the plan will allow the wider public to access archaeological material as well as excavation notes from the Agora excavations, which lasted 80 years, as well as getting more from an actual visit in the archaeological site itself.