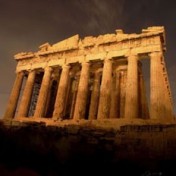 Thirty million stones, connected with the Parthenon have been found around the eternal monument or incorporated in its fortification. However, they are not from the Parthenon itself but from previous temples dedicated to Athena, whom the Parthenon replaced.
The Parthenon had three “past lives”: in the wider area it now occupies there was, at first, a “pre-Parthenon”. In 570 BC this was replaced by the so-called Ecatompedon, a Doric temple made by porous stone and decorated with marvelous sculpture, which still retain their colour! Around 525, the Ecatompedon gave way to the “Ancient Neos”, an even more luxurious monument of Parian marble, also with remarkable sculpted decoration. After its destruction by the Persians, the Athenians buried its remains (as they had done with the ones of the Ecatompedon) while putting a small amount in their walls, to remind them the destruction.
Pieces of the Parthenon’s past lives can still be seen in the Acropolis Museum.