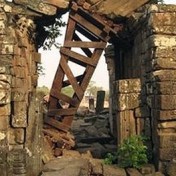 A new internet platform has been launched today to rescue cultural heritage sites on the verge of being irremediably lost, said Global Heritage Fund, a California-based nonprofit organization that focuses on historical preservation.

Called Global Heritage Network (GHN), the platform is the first early warning and threat monitoring system for saving endangered sites in developing countries, where financial resources and expertise are limited.

Each site is identified by a color, which determines the threats scale. Destroyed sites are marked with black spots, “rescue needed” sites are signed in red, while at risk and stable sites are indicated with orange and green marks respectively.