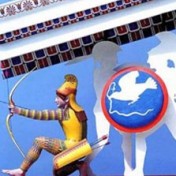 The amazing story of the Aegina Marbles

The adventurous story of a less known set of stolen marbles is told through a new exhibition in Munich. The marble decoration of the Temple of Athena Afaia in Aegina was found in 1811 by a British-German bunch of adventurers who smuggled it to Athens and then tried to sell it. Having argued on whether the artefacts’ final destination would be the British Museum of Germany, they ended up tricking both the representative of Crown Prince Ludwig of Bavaria as well as the British Museum agent, smuggling the ancient treasure to (British) Malta whilst, at the same time, it was sold to the Bavarians! The amazing set of marbles – part of whom retains traces of their ancient colouring  – found its way to Munich, Bavaria, once it had kept in Malta for two years due to the British refusal to hand it in.
The Aegina Marbles, previously exhibited in Munich twice, will now be presented for a third time.