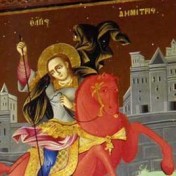 Lost and Found: from Epirus to the UK and back again

23rd of December 2010. In front of an icon depicting Christ, a Catholic nun is explaining the meaning of Christmas through an analysis of the icon’s details, in a documentary specially filmed by British channel ITV in London’s Temple Gallery .

40 days later, two Greek newspapers of the city of Ioannina reveal that Temple Gallery was the final destination of many icons stolen from the region of Zagori and and sold illegally to private collectors.

The report soon found its way to Britain where ITV announced everything through its own news report, also playing again the video showing the nun and the icon. Now, it has been decided that the icons should be officially returned to Greece. Greek officials will be in London on the 14th of April to receive the icons.