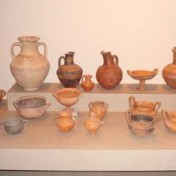 Treasures from the Age of Homer found in Thessaly

A hoard of impressive artefacts were hosted for three millenniums in six little-known tholos tombs of Geometric date found at Chloe, a site near Velestino, Thessaly, Greece.

The tombs, smaller in size than their Mycenaean “predecessors”, had been used by several generations of a Protogeometric Era family, having a lifespan of three centuries (10th – 8th century B.C.). Inside were found, apart from a large number of Protogeometric pottery vessels, jewellery and coil-shaped hair ornaments of gold and copper, pins, broaches, belt-fasteners of gold and iron, beads of semi-precious stones, as well as a splendid glass necklace.  Ms. A. Doulgeri – Indgesiloglou, Head of the 13th Ephorate of Prehistoric and Classical Antiquities also stressed on the importance of several copper vessels found in the tomb and had been probably used as drinking vessels.

All the tombs will be visible according to a program funded by ESPA 2007-2013.