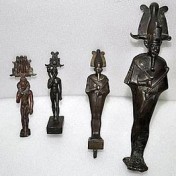 The artefacts all date to the Late Period of ancient Egyptian history (688-332 BC), and include two statues of Osiris, god of the afterlife, and two statues of Harpocrates, who represented Egypt's national patron god Horus as a child.

One statue of Osiris (37.5 cm tall) and one of Horus (18cm tall), are treasures that were missing from the Egyptian Museum, Egypt's Supreme Council of Antiquities said.

Police seized the four statuettes from thieves who they believe stole them during the anti-government unrest that rocked Egypt in late January and led to former president Hosni Mubarak's resignation on 11 February.

The recovered statuettes bring the total number of objects missing from Cairo's Egyptian Museum to 31 objects (out of an original total of 54), Egypt's Supreme Council of Antiquities said.