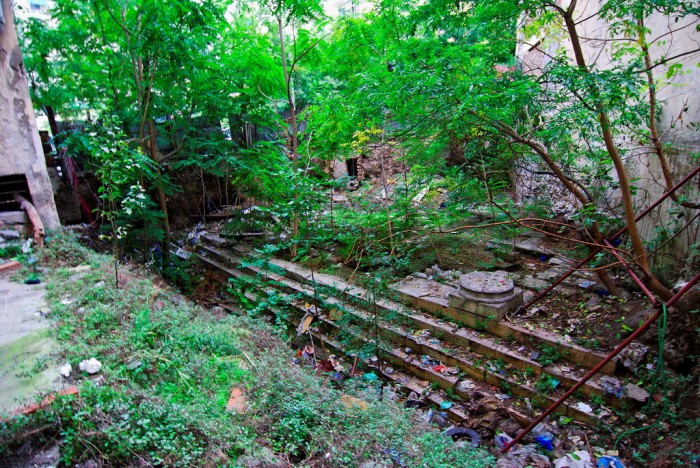 Temple of Aphrodite to be Buried by Urban Progress?

Tucked away behind metal construction fences lie some of the visible remains of an ancient temple. Most of the ancient temple foundations are now hidden, overlaid by urban sprawl, and what fraction can still be seen is eclipsed and sandwiched in by buildings. The unsuspecting pedestrian may never even notice it. It is shrouded in part by overhanging vegetation. It lies almost forgotten now within its modern context as the steady march of change and development has passed it by.

The Late Archaic period temple, 200 years older than the Parthenon, was originally built to honor the Greek godess of Aphrodite (Venus), the godess of love, in the 6th century B.C. It was later moved during Roman times to another location, which was considered a sacred area where there was a concentration of temples and shrines. There it has since remained, a part of the ancient area of Thessaloniki and now resting within the municipality of modern Thermaikos in the city Square of Antigonidon. It is an example of the Ionic style of architecture that was a trademark of ancient Greece during the 6th – 5th centuries BC.

To be fair, not all of the ancient temple’s elements and features have been left to oblivion beneath the surface. Some of its architectural features and artifacts can be seen today by visitors to the Archaeological Museum of Thessaloniki, thanks to the efforts of the archeologists and officers of the 6th Department of Prehistoric and Classical Antiquities. But, reports officials of the Temple of Venus project, “The height of the columns reaches seven meters and realistically cannot be exhibited in any exhibit halls of the museum in order to highlight the exact size.”

The temple was first excavated in 1936, after which it fell off the map during the invasion and destruction of the Nazi occupation and subsequent postwar urban development. In 2000, excavations were renewed under the direction of well-known archaeologist A. Tassios in connection with the demolition of an apartment building that overlaid the remains. He uncovered the temple, Grecian-Roman statues, and architectural fragments, at least some of which are now exhibited in the Museum.

Like many of the other great monuments and antiquities of Greece, the temple is a symbol of national pride, thought of as not only a treasure of Greece but a priceless representation of global heritage.

In terms of priorities, however, not everyone sees it in quite the same way. Unless the land on which the temple rests can be expropriated by the Central Archaeological Council, new construction will ensure it remains buried and unseen, indefinitely. The owners of the land are opposed to expropriation. Continuing discussion between the parties will decide the fate of the temple. The issue represents a classic case of urban development versus cultural preservation and development.

Maintains the officials of the Temple of Venus project: “The architectural and artistic value of the temple is immense. The temple can be saved and honored as part of Greece’s rich history if its importance is realized and respected by the government. Cultural pride and history must be preserved and valued. Only one third of the possible artifacts have been excavated from this site.”