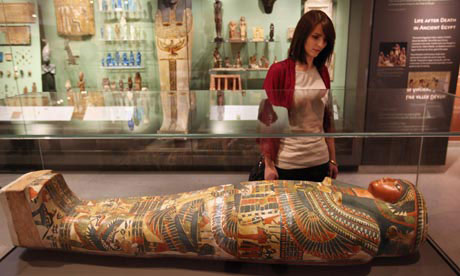 Galleries of Ancient Egypt and Nubia reopen on 26 November

At the core of the Ashmolean Museum’s spectacular new £5m Ancient Egyptian and Nubian galleries, designed by the architect Rick Mather and displaying one of the greatest collections outside Egypt, there lies a man who died almost 3,000 years ago – and has just been revealed as having no heart.

The Oxford museum has quadrupled visitor numbers since reopening in 2009 after a major rebuild – 1.2 million in the first year alone, making it the most visited museum in Britain outside London. However, the public must wait until Saturday (26 November) to see what had been a highlight for generations of visitors – the mummies and Egyptian collections, which cover 5,000 years of human history, including objects that have been part of the museum since it opened in 1683.

At a time when many museums are becoming uneasy about displaying human remains, the Ashmolean will have more than twice as many mummies on display, many for the first time including two young women with beautiful portraits bound into their bandaging showing them as they were in life in the period when the Roman empire finally swamped Egypt.

“The conservation department has been like a morgue in recent months, full of mummies and coffins,” the museum’s director, Dr Christopher Brown, said cheerfully.

The curator Liam McNamara said the state-of-the-art, climate-controlled display cases could be considered a continuation of the ancient Egyptians’ determination to preserve the body and ensure its afterlife. One female mummy is displayed with a translation of an offering inscription, which visitors will be invited to recite to ensure her food supply in the next world.

Curators rescued hundreds of objects from stores that have never been displayed or not seen for several lifetimes, and the mummy of Djeddjehutyiufankh – known to the staff as Jed – was one of the biggest surprises.

The priest from a temple in Thebes came to the museum more than a century ago, still in his undisturbed thick layers of linen bandages, and encased in a series of magnificent coffins.

When he was run through a Cat scanner at the nearby Churchill hospital, they expected to find the major organs, including the brain, missing – these were usually stored separately in elaborate jars. However, the heart was always returned, as it was essential to ensure the dead person’s afterlife.

Jed turned out to be packed with mud and sand, and with no trace of either a real heart, or the practical Egyptians’ customary addition of a heart amulet in case the fallible human organ proved wanting when weighed by the gods against a feather in the scales of justice.

“It is rather disturbing,” McNamara said. “We have no explanation, though a mistake by the embalmers seems the most likely explanation. Since he was buried within the temple, in these magnificent coffins, there is no evidence that he had fallen out of favour and it was done deliberately.”

Although embalming was a costly and highly skilled procedure, mistakes are known from other mummies, he explained – including one in the British Museum where the workers dropped a resin pot that stuck to the skull, tried and failed to remove it, and so bandaged the whole lot up together.

The artist Angela Palmer has made a glass sculpture based on another mummy in the collection, a two-year-old boy with – as the scans revealed for the first time – a twisted hip and a distorted skull. She was so moved that she visited Hawara, where the boy died almost 2,000 years ago, and brought back sand to sit with his body. Her sculpture will be permanently displayed beside his undisturbed, ornately wrapped mummy.

The displays also reunite a husband and wife separated since the 19th century, when the archaeologist Flinders Petrie excavated – from a rubbish dump at Amarna – a limestone statue of the breakaway pharaoh Akhenaten who founded a new religion and a new capital, and the headless image of one of the most famously beautiful women in history, his wife Nefertiti. The pharaoh went to Oxford, the queen to the British Museum, which has loaned her so they can be together again.

The new galleries had to be rebuilt around one gigantic object that was too heavy to move – a massive stone shrine built by the Nubian king Taharqa in 680 BC inside a much older temple, portraying him as a pharaoh worshipping Egyptian gods. The shrine arrived in Oxford in the 1930s in 150 wooden crates, and became the only free-standing pharaonic building in Britain. Archaeologists still argue about what it originally held, but visitors can now peer inside and see gleaming in the darkness a statue of Taharqa, loaned by Southampton museums. McNamara revealed the truth of what lay behind the wooden door closing off the enigmatic interior in the old displays: the sacred ancient shrine had become a handy, 20th-century box room.