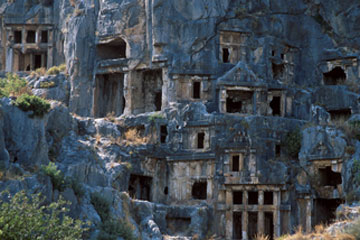 Turkish officials have begun work to reinstate in its original findspot a relief showing a child that was smuggled from ancient city of Myra in the southern province of Antalya’s Demre district,  – home to the tomb of Saint Nicholas and a popular place for Christian pilgrims –  since in 1886 and taken to Athens.

“This child relief is on display at the Athens Museum. He is waiting to return to his family. It should be a universal mission for us to bring it back,” said Professor Nevzat Çevik, the head of excavations at the ancient city and a scholar at Akdeniz University’s Faculty of Literature the Chairman Archaeology Department.

An official application will be made to Athens in the coming days for the return of the relief after Çevik enlisted the support of Turkish Culture and Tourism Minister Ertuğrul Günay on the issue.

Çevik said the relief was one of the most important smuggled artifacts in the country and added that it had famously come from a rock grave with many images in Myra.

Officials’ hopes for the repatriation of the relief have been buoyed by last year’s return of “Weary Herakles,” a statue that had been on display at the Boston Museum for 31 years.

Çevik said the artifacts were not examples of cultural heritage but a cultural trust and added that the Ottoman Empire had one the world’s richest archaeological heritages.

“But unfortunately, it had its weakest period in the 19th century, during which time the smuggling of artifacts reached its peak in Europe. European consulate general officials, rich people who were interested in old artifacts and engineers who came to the empire for road construction conducted excavations in Ottoman lands and took artifacts to their countries,” he said.

Reliefs at the Ephesus Artemis Temple, the Bergama Zeus Altar, the Xanthus Monuments and the treasures of Troy were all smuggled overseas, Çevik said.

“The magnificent Trysa Heroon was smuggled to Vienna by Austrian Otto Benndorf in this way. European archaeologists saw it as their right to take these artifacts, thinking that ‘Turks don’t know their value.’ They easily persuaded the sultans and other palace officials to remove them. When they failed to persuade [authorities], they smuggled them out,” the professor said.