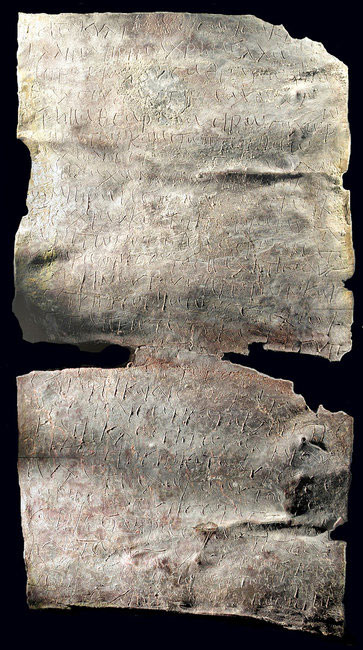 Written on a lead tablet found in Antioch

A vegetable seller named Babylas was the target of an alarming curse nearly 2,000 years ago. Written on a lead tablet found in Antioch, one of the largest cities in the Roman Empire, the curse calls on the gods to tie up the hapless greengrocer, then “drown and chill” his soul.

The curse is described in the German journal Zeitschrift für Papyrologie und Epigraphik by Alexander Hollmann, a classicist at the University of Washington who studies Greek and Roman magic.

The curse was written on both sides of the tablet. One side calls upon the god Iao to bind Babylas; the other side addresses multiple gods and calls for the tablet to be thrown down and “killed” in a well — followed, in the same way, by Babylas.

“It also shows where he lives,” Dr. Hollmann said. “It’s all sort of designed so the gods know exactly where to find him.”

Although the author of the curse is not mentioned in the writing, Dr. Hollmann speculates that it may have been a rival businessman.

“This is a pretty serious curse,” he said. “And we have other evidence that these kinds of practices went on.”

The tablet was found in a well in the 1930s, presumably the same one it was dropped in. Since then, along with many other items excavated from Antioch, which lies near Turkey’s Syrian border, the tablet has been at the Princeton University Art Museum.

Curse tablets like this one have shown up in Rome, in Carthage in Africa and throughout the ancient Mediterranean region, said Dr. Hollmann, who has deciphered one other such tablet from Antioch and is working on six others.

“They are so similar, because professionals were using magic books that circulated,” he said. “These had templates that were used for hundreds of years.”