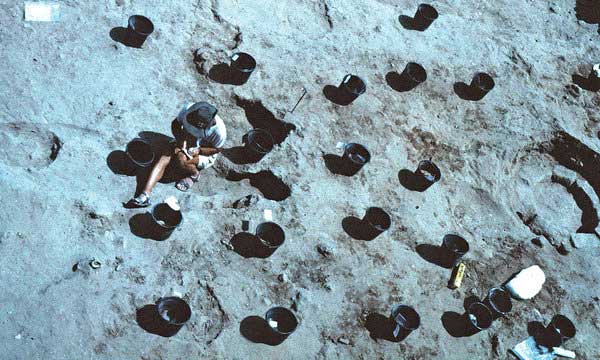 News from the Ashkelon Dig

To the naked eye, the white, powdery substance appeared to be plaster. That’s what the professional and volunteer archaeologists at a dig in Israel concluded.

To be certain, though, they subjected the chalky dust to spectroscopy and a petrographic microscope, only to discover that it was not a manufactured substance, but decayed plant life and fecal matter.

What that meant to the archaeologists from the Leon Levy Expedition to Ashkelon – a former seaport south of Tel Aviv that was home to successive civilizations over thousands of years – was that structures thought to have been inhabited by people were more likely occupied by animals. That revelation upended their view of what they were excavating.

“For archaeologists,” said the expedition’s co-director, Daniel M. Master, a professor at Wheaton College in Illinois, “it was the difference between a palace and a stable.”

This marriage of social and natural sciences is an emerging discipline that has been called microarchaeology by Steve Weiner, director of the Kimmel Center for Archaeological Science in the Weizmann Institute in Israel, which is collaborating with the expedition.

“The unique approach at Weizmann is not about instruments nor about methodologies,” Dr. Weiner said. “It is all about solving archaeological problems with the help of instrumentation – both in the field and in the lab.”

Weizmann archaeology researchers have a laboratory on the site here, along with equipment to study archaeometallurgy, ancient DNA, radiocarbon dating and micromorphology, the microscopic structures found in organisms and soil. A $2 million accelerator mass spectrometer is on order.

“We have developed a whole new integrative approach to archaeology that starts with the team identifying a good problem in the field and then continues interactively between field and lab,” Dr. Weiner said.

Dr. Master said: “Steve’s team demonstrated that the white lamina that archaeologists have routinely called ‘bits of plaster’ were actually degraded plant remains. Further, his team showed ways of analyzing these plants that could detect the difference between sheaves of grain and plant bits mixed into animal dung.”

Dr. Master and Lawrence E. Stager, director of the Semitic Museum at Harvard University, who has overseen the dig for 25 years, embarked on a mutually beneficial collaboration with the Kimmel Center after Dr. Master was invited to lecture there. Suddenly, new windows opened.

Sifting sediment through flotation turned up lint near mysterious clay cylinders. That discovery, Dr. Master recalled, demonstrated that the clay cylinders were actually loom weights, and “this observation has led to a revolution in the studies of the weaving industry across the eastern Mediterranean in the early Iron Age.”

Soil chemistry analysis found that a four-horned altar thought to be a traditional Levantine device for burning incense was not used for burning at all. Archaeologists identified it instead as a Mycenaean and Minoan libation altar on which liquids were poured.

“Our work with the Weizmann team has been a leap forward,” Dr. Master said.

Sharing workers and a mobile laboratory allows the expedition to analyze samples rapidly and adjust its excavating techniques accordingly. The application of pure science to practical challenges enables Kimmel Center experts to hone their research skills. The collaboration is not unique, but it is unusual for a discipline that falls between the humanities and natural science.

“In Israel, archaeology is taught in the faculties of the humanities, making it very difficult for archaeologists to fully exploit the powerful new scientific tools,” Dr. Weiner said.

“Although there is much good will both on the side of natural scientists intrigued by the exciting archaeological questions to be addressed and the archaeologists who are eager to obtain the information provided by scientific tools, a chasm of miscommunication exists between the two camps,” he said. “The frequent result is that minimal benefit is obtained from maximal effort.”

The collaboration with the Leon Levy Expedition, he said, means “we excavate, analyze samples in minutes, get results, change excavation strategy, sample as well as we can and then continue in the base camp lab and, between seasons, in the home lab.”

Last summer, Michael Toffolo, a 27-year-old doctoral student at Tel Aviv University who conducts his lab work as a visiting student at the Kimmel Center, was lent to the Leon Levy Expedition, which was unearthing an ash layer dating from 604 B.C., when the Babylonians led by Nebuchadnezzar sacked the walled seaport.

“Among all the pieces of information that I managed to gather so far with my lab work, the most important is probably the presence of phytolith floors,” composed of microscopic plant remains, he said.

Mr. Toffolo was able to determine whether the floors were made of wild grasses used as bedding, or agricultural byproducts like straw, or ash from wood used as fuel. As a result, what originally looked like plaster turned out to be cereal husks on which an iron plow point was lying; a grain storage pit from the Egyptian period; and a floor composed of woven palm leaves.

“This type of information can change the archaeological interpretation of an entire structure or building, according to the human activities identified,” Mr. Toffolo said.

The discovery that the white power was not plaster led scientists to the conclusion that a rural economy existed in an Iron Age town center.

“Floors also define a stratigraphic layer – everything below is older and above younger,” Dr. Weiner said.

Each June and July, the six-week Leon Levy Expedition to Ashkelon draws college students and other volunteers. Sponsored since 1985 by the Leon Levy Foundation, the expedition is administered by the Harvard Semitic Museum and a consortium that includes Wheaton and Boston Colleges and is conducted under the auspices of the Israel Antiquities Authority.

Dr. Weiner said, “We try to solve archaeological problems using the macroscopic record – what you see – and the microscopic record – revealed by instruments.” Weizmann is working with several other Israeli excavations.

“We do not always have success answering our questions in archaeology, and sometimes microarchaeology is frustrating,” Dr. Master said, “but together we are using all the tools at our disposal to uncover the clues that will help us to reconstruct ancient life at Ashkelon.”