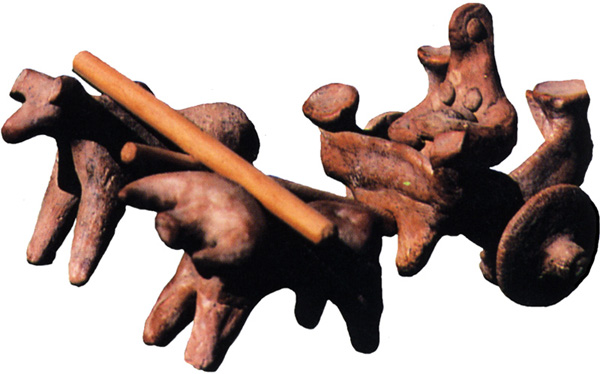 Why It Took So Long to Invent the Wheel

Wheels are the archetype of a primitive, caveman-level technology. But in fact, they’re so ingenious that it took until 3500 B.C. for someone to invent them. By that time — it was the Bronze Age — humans were already casting metal alloys, constructing canals and sailboats, and even designing complex musical instruments such as harps.

The tricky thing about the wheel is not conceiving of a cylinder rolling on its edge. It’s figuring out how to connect a stable, stationary platform to that cylinder.

“The stroke of brilliance was the wheel-and-axle concept,” said David Anthony, a professor of anthropology at Hartwick College and author of “The Horse, the Wheel, and Language” (Princeton, 2007). “But then making it was also difficult.”

To make a fixed axle with revolving wheels, Anthony explained, the ends of the axle had to be nearly perfectly smooth and round, as did the holes in the center of the wheels; otherwise, there would be too much friction for the wheels to turn. Furthermore, the axles had to fit snugly inside the wheels’ holes, but not too snugly — they had to be free to rotate.

The success of the whole structure was extremely sensitive to the size of the axle. While a narrow one would reduce the amount of friction, it would also be too weak to support a load. Meanwhile, a thick axle would hugely increase the amount of friction. “They solved this problem by making the earliest wagons quite narrow, so they could have short axles, which made it possible to have an axle that wasn’t very thick,” Anthony told Life’s Little Mysteries.

The sensitivity of the wheel-and-axle system to all these factors meant that it could not have been developed in phases, he said. It was an all-or-nothing structure.

Whoever invented it must have had access to wide slabs of wood from thick-trunked trees in order to carve large, round wheels. They also needed metal tools to chisel fine-fitted holes and axles. And they must have had a need for hauling heavy burdens over land. According to Anthony, “It was the carpentry that probably delayed the invention until 3500 B.C. or so, because it was only after about 4000 B.C. that cast copper chisels and gouges became common in the Near East.”

The invention of the wheel was so challenging that it probably happened only once, in one place. However, from that place, it seems to have spread so rapidly across Eurasia and the Middle East that experts cannot say for sure where it originated. The earliest images of wheeled carts have been excavated in Poland and elsewhere in the Eurasian steppes, and this region is overtaking Mesopotamia (present-day Iraq) as the wheel’s most likely birthplace. According to Asko Parpola, an Indologist at the University of Helsinki in Finland, there are linguistic reasons to believe the wheel originated with the Tripolye people of modern-day Ukraine. That is, the words associated with wheels and wagons derive from the language of that culture.

Parpola thinks miniature models of wheeled wagons, which are commonly found in the Eurasian steppes, likely predated human-scale wagons. “It is … striking that so many models were made in the Tripolye culture. Such models are often thought to have been children’s toys, but it seems more likely to me that they were miniature counterparts of real things,” he said. “The primacy of the miniature models is suggested by the fact that wheeled images of animals even come from native Indian cultures of Central America, where real wheels were never made.”