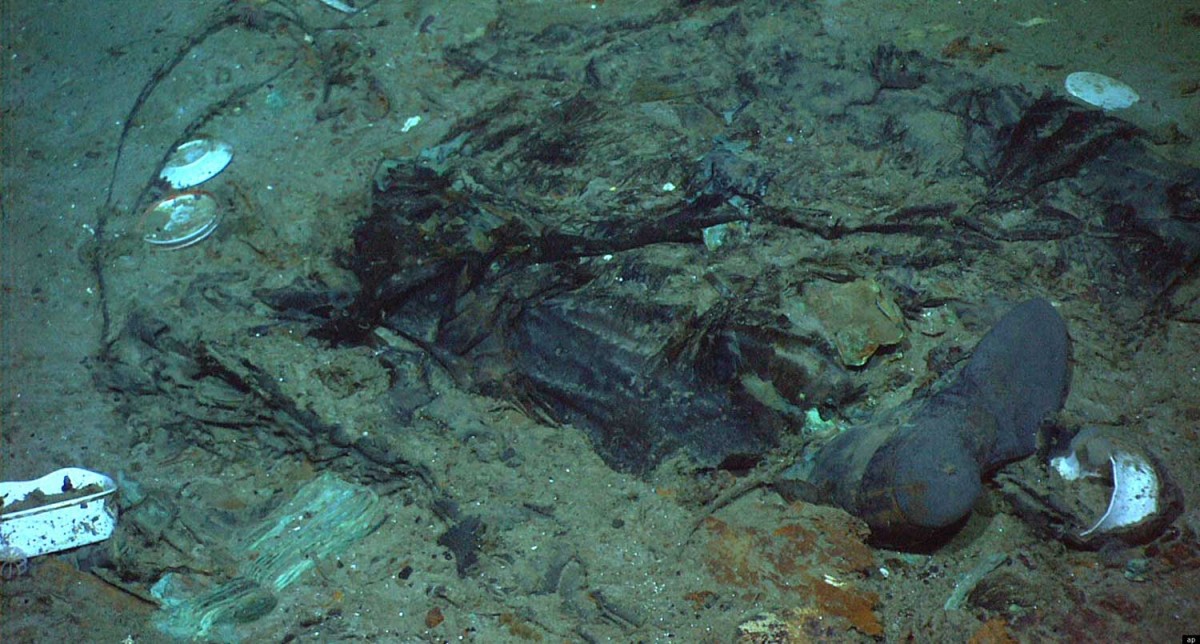 Human remains at the Titanic?

Human remains may be embedded in the mud of the North Atlantic where the New York-bound Titanic came to rest when it sank 100 years ago, a federal official said Saturday.

A 2004 photograph, released to the public for the first time this week in an uncropped version to coincide with the disaster’s centenary, shows a coat and boots in the mud at the legendary shipwreck site.

“These are not shoes that fell out neatly from somebody’s bag right next to each other,” James Delgado, the director of maritime heritage at the National Oceanic and Atmosphere Administration, told The Associated Press in a phone interview.

The way they are “laid out” makes a “compelling case” that it is where “someone has come to rest,” he said.

The image, along with two others showing pairs of boots resting next to each other, were taken during an expedition led by NOAA and famed Titanic finder Robert Ballard in 2004. They were published in Ballard’s book on the expedition. Delgado said the one showing a coat and boots was cropped to show only a boot.

The New York Times first reported about the photographs in Saturday editions.

Filmmaker James Cameron, who has visited the wreck 33 times, told the newspaper that he had seen “zero human remains” during his extensive explorations of the Titanic. “We’ve seen shoes. We’ve seen pairs of shoes, which would strongly suggest there was a body there at one point. But we’ve never seen any human remains.”

For Delgado, who was the chief scientist on an expedition in 2010 that mapped the entire site, the difference in opinion is “one of semantics.”

“I as an archaeologist would say those are human remains,” he said, referring to the photograph of the coat and boots specifically. “Buried in that sediment are very likely forensic remains of that person.”

He said in an email that the images “speak to the power of that tragic and powerful scene 2 ½ miles below” and “to its resilience as an undersea museum, as well as its fragility.”

“This is an appropriate time to note the human cost of that event, and the fact that in this special place at the bottom of the sea, evidence of the human cost, in the form of the shattered wreck, the scattered luggage, fittings and other artifacts, and the faint but unmistakable evidence that this is where people came to rest, is present,” he said.

He said the images are also evidence that society could do a better job protecting the site.

There has been a long fight to protect the Titanic since it was rediscovered by Ballard in 1985, beginning with a federal law passed by Congress aimed at creating an international agreement to transform the shipwreck into an international maritime memorial. Sen. John Kerry introduced what some observers see as stronger legislation April 1 aimed at protecting the site from “salvage and intrusive research.”

But the luxury liner, which went down April 14, 1912, after striking an iceberg, sits in international waters, limiting what the U.S. government can do.

Delgado said an international treaty would need to be negotiated between Britain, Canada, France and the U.S.