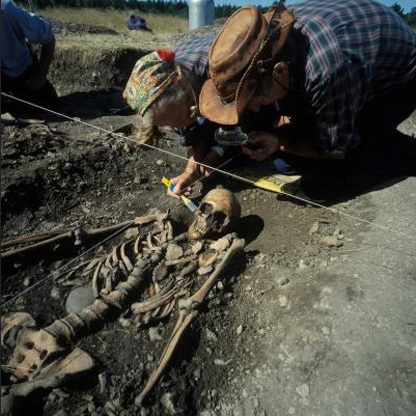 One of the most debated developments in human history is the transition from hunter-gatherer to agricultural societies. This week’s edition of Science presents the genetic findings of a Swedish-Danish research team, which show that agriculture spread to Northern Europe via migration from Southern Europe.

“We have been able to show that the genetic variation of today’s Europeans was strongly affected by immigrant Stone Age farmers, though a number of hunter-gatherer genes remain,” says Assistant Professor Anders Götherström of the Evolutionary Biology Centre, who, along with Assistant Professor Mattias Jakobsson, co-led the study, a collaboration with Stockholm University and the University of Copenhagen.

“What is interesting and surprising is that Stone Age farmers and hunter-gatherers from the same time had entirely different genetic backgrounds and lived side by side for more than a thousand years, to finally interbreed,” Mattias Jakobsson says.

Agriculture developed in the Middle East about 11,000 years ago and by about 5,000 years ago had reached most of Continental Europe. How the spread of agriculture progressed and how it affected the people living in Europe have been debated for almost 100 years. Earlier studies were largely based on small amounts of genetic data and were therefore unable to provide univocal answers. Was agriculture an idea that spread across Europe or a technique that a group of migrants took with them to different regions of the continent?

“Many attempts, including using genetics, have been made to come to terms with the problem since the significance of the spread of agriculture was established almost 100 years ago,” Anders Götherström says. “Our success in carrying out this study depended on access to good material, modern laboratory methods and a high level of analytical expertise.”

The study in question entailed the research team using advanced DNA techniques to characterise almost 250 million base pairs from four skeletons of humans who lived during the Stone Age, 5,000 years ago. Just ensuring that the DNA obtained from archaeological material is truly old and uncontaminated by modern DNA requires the use of advanced molecular and statistical methods.

The study involved thousands of genetic markers from the four Stone Age individuals, of which three were hunter-gatherers and one was from an agricultural culture. All of the archaeological data shows that the Stone Age farmer was representative of his time and group and was born and raised near the place of his burial. The researchers compared their findings with a large amount of genetic data from living individuals.

“The Stone Age farmer’s genetic profile matched that of people currently living in the vicinity of the Mediterranean, on Cyprus, for example,” says Pontus Skoglund, a doctoral student who developed new analytical methods used in the study. “The three hunter-gatherers from the same time most resembled Northern Europeans, without exactly matching any particular group.”

Accordingly, the study strongly supports the thesis that the agricultural revolution was driven by people who migrated from Southern Europe. That they lived side by side with the hunter-gatherers for many generations, to eventually interbreed, explains the patterns of genetic variation that characterise present-day Europeans.

“The process appears in the end to have had the result that nobody today has the same genetic profile as the original hunter-gatherers, although they continue to be represented in the genetic heritage of today’s Europeans,” Pontus Skoglund says.

Jan Storå, researcher at Stockholm University, says the results are extremely exciting for archaeology in general and research into the Stone Age in particular.

“Archaeology has become a stimulating interdisciplinary field. We have obtained new, concrete biological data about Stone Age people that provides scope for discussions about origins, mobility and social networks pertaining to a period that has lately been the focus of lively debate. Scientific DNA studies have broadened the basis for engaging discussions within archaeology in recent years,” Jan Storå says.