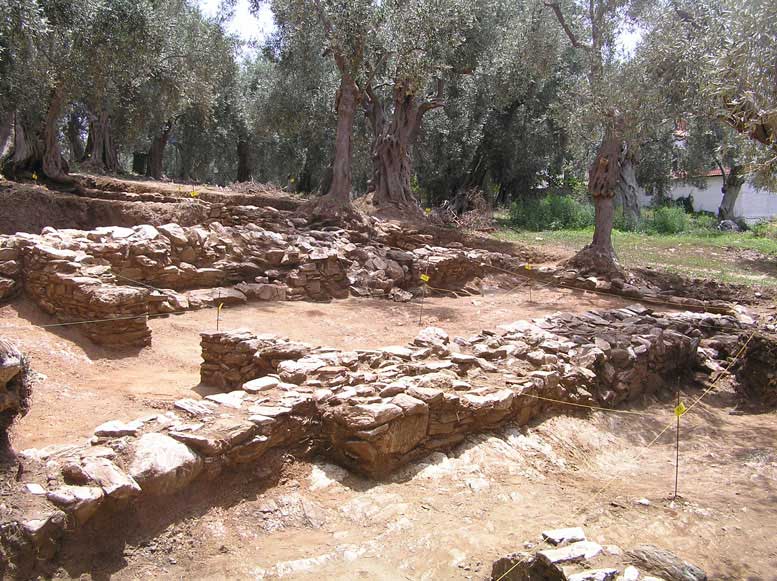 Part of a significant Byzantine settlement was excavated in Lefokastron district (Pelion) by the 7th Ephorate of Byzantine Antiquities during a rescue excavation conducted recently. The archaeologists were informed of the antiquities by local inhabitants of Lefokastron.

The rescue excavation was conducted during the construction of a country house, in a plot north of the small peninsula of Lefokastron and not far from the sea. During construction of the house, a building complex, consisting of at least eleven separate rooms, was discovered.

The complex, which is part of the settlement mentioned above, was built in successive phases from the Early Christian period (4th-6th centuries AD) up to the Middle Byzantine years (9th-12th centuries AD).

In a small plot on the North-eastern border of the settlement, part of a bath building dating back to the Early Christian period has been found (4th-5th centuries AD). Two rooms were excavated in this building. One of them is rectangular, so it could be a swimming pool. The excavation data are not abundant, but archaeologists believe that, due to its small dimensions, it must have been a private bath, attached to a house.

Archaeologist in charge of the dig, Tenia Anastasiadou, has presented the spectacular finds in the 4th Conference for the Archaeological Work in Thessaly and Central Greece during the past four years, analyzing the evidence which came to light.

According to the archaeologist, initially three separate rooms were built, which then were connected through walls. In that way, new rooms of small dimensions were created.

“We estimate that the building had multiple uses. Some spaces served as storage rooms and were semi-underground, some of them were living spaces, and near the shore a semi-open-air space was discovered with a ceramic kiln, for craft production”, she adds. The buildings mentioned above were discovered at a relatively shallow depth of 0,3-0,5 m. and their foundations are laid in natural rocky ground.

Tenia Anastasiadou points out that the structure of the building has the characteristics of the Middle-Byzantine buildings and the fact that they found part of the settlement, in other words the remains of houses and utensils, is very important.

The archaeological survey brought to light plenty of pottery, such as pots of domestic use, storage and transportation vessels, as well as a bronze coin from the 11th century.

In general terms, “we have the image of a building built with no particular care, with simple earthen floors and mud walls, where older walls are incorporated. The mobile finds consist of pottery, jars and amphorae, cooking pots and tableware” the archaeologist says.

Traces of an important city

The building complex is part of the residential tissue of the Early Christian and Byzantine settlement of Lefokastron. There is no reference about Lefokastron in the ancient literature, but archaeologists and historians who had traversed the area in the 19th and early 20th century, noted that “a significant fortified settlement of the Byzantine period” was situated here.

No traces of the Byzantine settlement are maintained today. On the other hand archaeologists have plenty of evidence dating from the flourishing period of the settlement, primarily from the remains of the churches found in the area.

In the eastern side of the settlement, along the road leading to Afissos, there are the remains of a Byzantine temple. Long, vaulted walls have also been traced in the rock, but they need to be excavated.

Opposite from these remains, there is the Meta-Byzantine church of Agios Panteleimonas, and at the centre of the modern settlement there is the church of Panayia. This church was built upon the remains of a Byzantine church, remains of which are still apparent at the Eastern side of the modern church. At the north, there are remains of another small church, dedicated, according to locals, to Ayia Paraskevi. Antiquities are scattered all over the district of Lefokastron.

In the northern part of the village, at the left of the road leading to Afissos, on a “tongue” of land protruding into the sea, there are the remains of Ayia Efemia. In the south, at a similar site, the church of Ayios Sostis was built and opposite of it, at the Kalogria site, vaulted tombs were excavated in the past. This is practically the first survey conducted in the area by the 7th Ephorate and the evidence that came to light is very important for the examination of its historical roots.