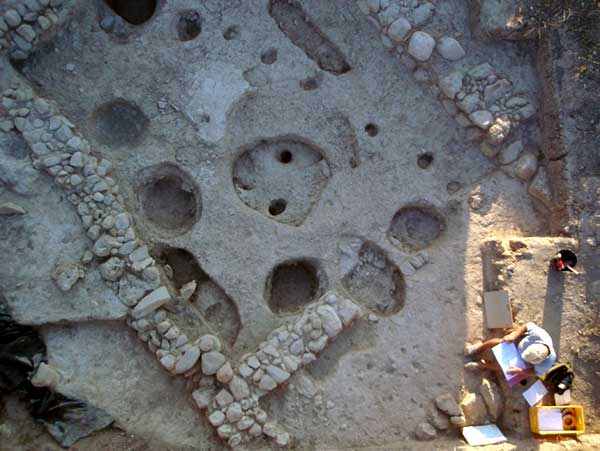 Completion of the latest season of excavation

The Ministry of Communications and Works, Department of Antiquities announces the completion of the latest season of excavation at the Early–Middle Bronze Age settlement of Kissonerga-Skalia. The excavations took place during July 2011 by a team of the University of Manchester, under the direction of Dr Lindy Crewe.

Latest occupation at the site consists of a building complex covering an area of 600m2 (in Trenches B, G and G2). Within Trench B, excavations have revealed a large courtyard, framed by substantial walls with foundations built of large limestone slabs, all associated with a built plaster floor on which were found plastered pits, pottery, weights and spindle whorls.

At the south end of the courtyard, presumably in an outdoor space, was a large mud plaster-built structure (Feature 33) with thick curvilinear walls of at least 0.8 m high, which the concavity suggests may have formed a domed roof with a rounded opening, not dissimilar in appearance to a traditional village fournos. In the north of Trench B, a back wall with a threshold leading to a possible corridor was found, dividing off the space.

To the north of Trench B, in Trenches G and G2, the unusually wide (1.2 m) wall of rubble construction was exposed, which was partially excavated in previous seasons. The team uncovered c. 25 m length with no evidence for any interior subdivisions.

In the west of G2, the wall ends, opening on to what appears to be an area with industrial activities involving at least two pithoi partially embedded part of the way into pits with ashy concentrations nearby. This area requires further investigation.

At the other end, to the south, the wall ends in an entranceway with an extremely finely made plaster threshold. Over the entranceway the wall reappears again, extending beyond the limits of the trench, indicating that the structure is larger and further work needs to occur in future seasons.

Although the excavation has only exposed the latest phases thus far, pottery styles found in the debris indicate a long occupation from the beginning of the Early Cypriot Bronze Age and also attest to contacts with other parts of the island. The University of Manchester team are hopeful that future seasons will reveal these earlier phases preserved beneath later occupation.