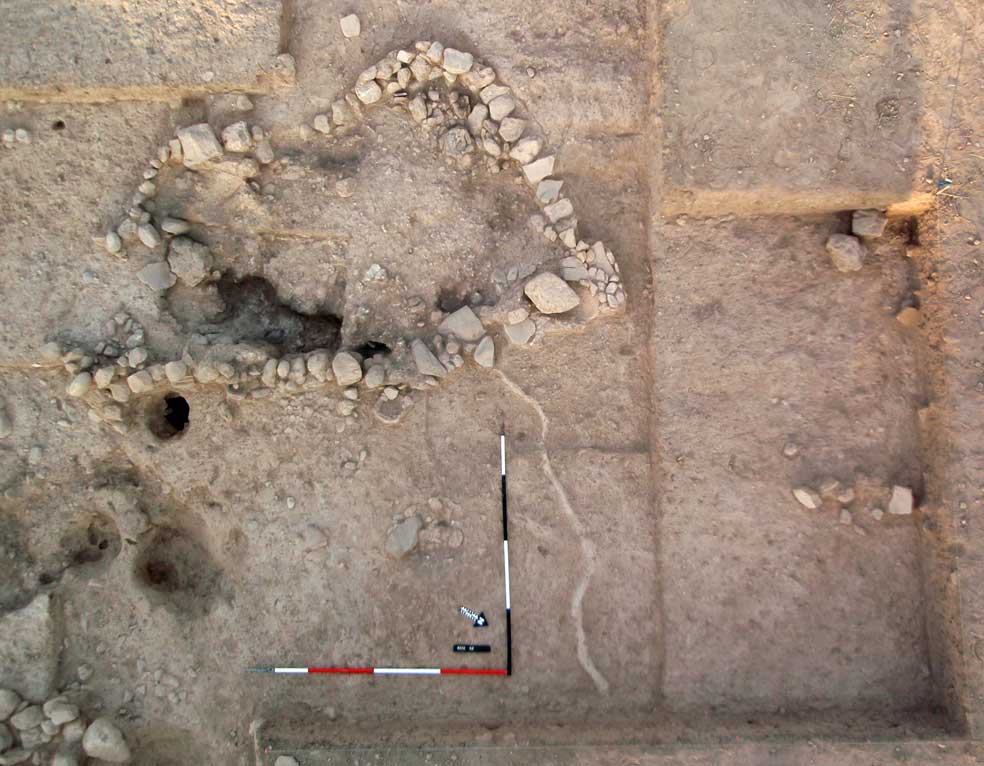 The 2012 season of excavation at the Bronze Age settlement of Kissonerga-Skalia near Paphos carried out during July by a University of Manchester team under the direction of Dr Lindy Crewe has been completed. The team uncovered further evidence of a large building complex dating to the threshold of the Late Cypriot Bronze Age (around 1750-1600 BC), which had been partially revealed in previous seasons and also investigated the interior space in an earlier domestic area dating to the Early-Middle Cypriot Bronze Age (around 2300-1900 BC).

During the final phase of occupation a large complex covering an area of 700 m2 was built, using a variety of techniques with thick stone wall foundations up to 1.2 metres wide and 35 metres long. The team has revealed a large courtyard with a plaster floor on which were found plastered pits, pottery, weights and spindle whorls and evidence for large-scale industrial activities, including a drying kiln around 2 m in diameter made from mud plaster. The room adjacent to the courtyard has now been partially excavated and further walls were revealed, subdividing the area. It isn’t clear what kinds of industrial activities were undertaken in other areas of the site but two large storage jars partially embedded in the ground were found adjacent to deep, narrow pits filled with charcoal, along with a small stone-built structure that was filled with fine ashy soil (see photo). Within this structure was found a large pottery jar, made from local clay but with evidence for manufacture on the slow potters’ wheel. This is the first time that a wheelmade pottery vessel has been found at the site and it fits well with the pattern seen elsewhere on the island as it is at this time (around 1650 BC) that wheelmade pottery was first manufactured on Cyprus.

In other areas of the site the team investigated earlier domestic structures and there is now evidence for a sequence of five floors, mainly of mud while two are of plaster, separated by layers of dumped material, probably to level the area prior to refurbishing. Pottery styles found indicate a long occupation from the beginning of the Early Cypriot Bronze Age and also attest to contacts with other parts of the island.

Following the excavation season the team held an experimental archaeology field school to replicate the excavated drying kiln, which is believed to have been used for the malting of grains for beer production as well as other uses, such as curing food. Within the reconstruction the team successfully dried malted barley on the interior floor and smoked meat in the hotter roofed area, as well as manufactured beer-like beverages using traditional techniques.