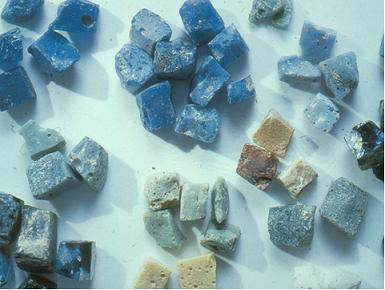 The how and where of Roman age glassmaking

An EU-funded interdisciplinary study has contributed a deeper understanding of glass production in Italy in the Roman age.

The project ‘The provenance of mosaic tesserae: an interdisciplinary study on Roman age glass production and trade in Italy’ (Promote) contributed knowledge and offered possible answers to open questions surrounding the Roman age glassmaking industry. An existing reconstruction of the economic model of ancient glass production, focusing on Italy and vitreous mosaic tesserae materials dating from 3rd century BC to 2nd century AD, has been advanced on the basis of archaeological and archaeometric literature. Hypothesising a three-phase productive system, information was lacking on the location of the primary productive centres and trading routes.

The EU-funded study worked to improve knowledge of ancient vitreous materials and develop a work procedure for applying trace and isotope analysis to the ancient glasses, as well as clarify the origin of the Roman age glasses in Italy. Integrating archaeological fieldwork with analytical characterisation of glass samples, research was successful in a number of areas.

The work protocol developed was tested in the laboratory for characterisation of the glasses. Based on the principle of analysis selection suited to solving archaeological problems, the research schedule gave priority to the application of non-destructive and micro-destructive techniques.

Interpretation of the lead, neodymium and strontium isotope analysis helped realise the overall aim of the project with analytical investigation clarifying that glasses used in Italy as Roman mosaic tesserae are comparable to raw glasses and glass vessels that circulated in the peninsula at that time. Analysis of the materials also helped prove the hypothesis that there existed few production centres, which were active for at least four centuries.

Promote activities and outcomes had a major impact both in terms of scientific results and training activity. The highly innovative data produced contributes a more in-depth understanding of the subject and the methodology developed is applicable to study of other glass artefacts from different historical periods.