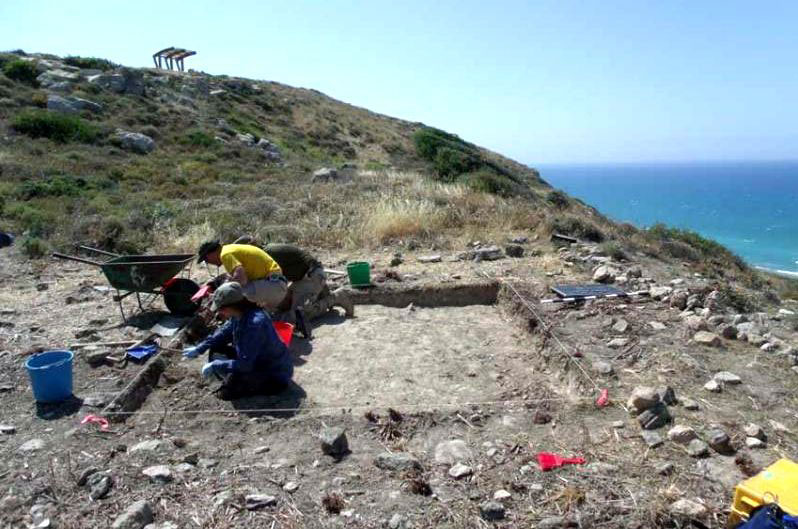 A team of archaeologists from a Texas theological seminary and the University of Cyprus is hoping to reveal the ordinary domestic lives of Cyprus’ early Christians in a new dig at Kourion (Curium) which was destroyed by a series of earthquakes around 365 AD.

A long-cherished hope of team leader Professor Thomas Davis is that excavations will also uncover the island’s first ever “house-church”, a private home where early believers met to worship at a time when fear of persecution prevented the erection of churches.

“We are trying to explore something which doesn’t really get looked at in Cypriot archaeology, and that’s the common people,” said Davis, a professor of Archaeology and Biblical Backgrounds at Southwestern Baptist Theological Seminary at Fort Worth Texas and previously a director of CAARI (Cyprus American Archaeological Research Institute).

“Secretly, I would love to find the first house church found on Cyprus. There was a large community here and we know there were Christian believers before the quakes.”

Kourion, which archaeologists believe numbered up to 10,000 people, is situated in an area steeped in mostly Roman history whose famous remains include a large theatre, a market place, public baths and mosaics. Close by is the Sanctuary of Apollon Ylatis.

“We are catching the window of transition, when Cyprus is becoming Christian, the earthquakes mark the major division,” said Davis, who has spent many years excavating in Cyprus and throughout the Middle East.

His last dig at Kourion was 28 years ago as a graduate student and he said it was “wonderful to be back” for the dig which is called the Curium Urban Space Project (CUSP).

Just three days into the dig this week, and after digging only 20 cms down, the team had already uncovered what could be the wall of a previously uncovered house. They intend to dig down for up to a further two metres.

“Currently, we’ve opened up an area of 27 m2 and we will expand it to about 70m2. We have found what I think it could be the wall of a house. It’s plastered, which means it’s not something solely utilitarian. The wall has been smoothed nicely; we will see with further investigations,” Davis said.

He explained that prior to the quakes from 365 to 370 AD, pagan temples in Kourion were still active, and there were no churches. Although the history of Christianity in Cyprus dates back to the historic visit of Saint Paul and Barnabas in around 45 AD, and although a Paphos proconsul was to become the first official Roman governor to embrace the religion, the spread of Christianity in Cyprus was patchy at first.

In Kourion this meant Christian worship remained secretive – hence the significance of the house-church – and it was not until after the earthquakes that churches replaced temples as places of worship.

“This change is obvious in the lives of the common people. In the earthquake debris from 25 years ago, we found a Christian ring with a Chi-Rho symbol, [the Monogram of Christ].

We also found Christian lamps. These people were partially pagan and some were Christian. This is the same type of evidence that the late Danielle Parks found in her Amathus gate cemetery excavation,” he said.

The professor noted that the mosaics in Kato Paphos are beautiful and well known, but added that his team is looking for the remains of people who were living normal lives.

“We are not looking for evidence of the elite but people like us. The people who were just trying to get by and were hit by the earthquake in 365; we’re trying to capture that moment and see what that looks like. It’s an important moment in time.”

The team has already found tessera fragments – pieces of mosaics – a considerable amount of pottery, some glass, and groundstone. No metal items have been found yet, but the team expects to uncover some.

“The pottery all fits the sort of window of the earthquakes, so it may be third century to fifth century. What really gives us the tight dates though are the coins and we haven’t found any yet, but we will.”

“I’m sure we will also find the high end stuff you bring out when your mother in law comes to visit, as well as the normal things you use every day,” he said.

“We want to find more of these types of things, to see the change, to discover these families, who are they, how they express their new faith, or if they hang onto their old faith. We want to see how Christianity is beginning to grow and expand.

“Of course by the fifth century – Christianity becomes what a Cypriot is, it’s part of the Cypriot identity.”

“Archaeologists like to study transition and change because it tells us so much about ourselves as we all go through change. When you understand the past you understand yourself much better.”