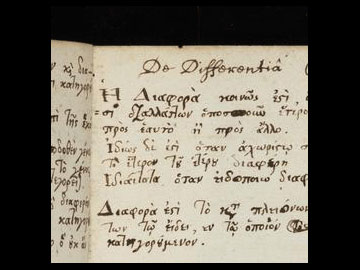 Newton’s manuscripts were written in Greek!

On the image above you see part of a handwritten note of Isaac Newton. This is a notebook Newton acquired while he was an undergraduate at Trinity College and used from about 1661 to 1665. It includes many notes from his studies and, increasingly, his own explorations into mathematics, physics and metaphysics.

While observing Newton’s note, you will notice something quite surprising: The notes are written in Greek! While the titles/subjects he was working on are presented in Latin –as well as the brief explanations at the margins of the pages- the subject analysis itself is given in a brief well written Greek text, in lowercase letters, with the necessary diacritics. It seems therefore that Greek language knowledge was so widespread that a scholar could use it effortlessly even in simple notes.

Due to the way it is written, the above mentioned notebook was judged ‘Not fit to be printed’. It was condemned to oblivion until 1872, when it was presented to the Library of Cambridge. In 2011 it was digitised and put online by Cambridge University