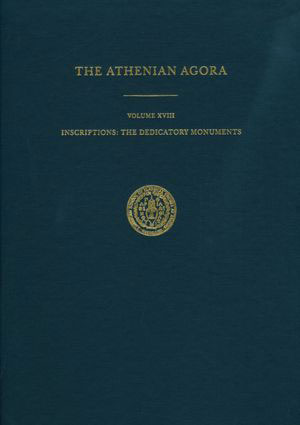 This is the last of five volumes presenting inscriptions discovered in the Athenian Agora between 1931 and 1967. Published here are inscriptions on monuments commemorating events or victories, on statues or other representations erected to honor individuals and deities, and on votive offerings to divinities. Most are dated to between the 4th century B.C. and the 2nd century A.D., but a few survive from the Archaic and Late Roman periods. A final section contains monuments that are potentially, but not certainly, dedicatory in character, and a small number of grave markers omitted from Agora XVII. Each of the 773 catalogue entries includes a description of the object inscribed, bibliography, a transcription of the Greek text, and commentary. There are photographs of each piece of which no adequate illustration has yet been published, including newly joined fragments. The volume concludes with concordances and six indexes.