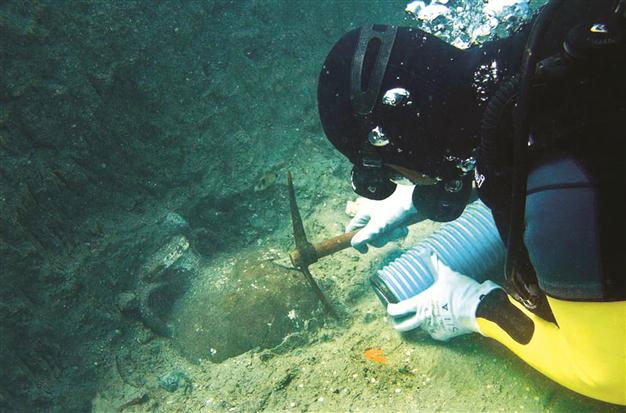 Turks in the Aegean

Turkey’s leading underwater archaeology research center has discovered a large port facility in İzmir’s Urla district that is believed to date back to the archaic period between the 6th and 7th centuries B.C.

“It is the first time we have seen such a developed one,” Ankara University Underwater Research and Application Center (ANKÜSAM) Chairman Professor Hayat Erkanal recently said, noting that only simple port facilities from the same period had previously been discovered on Greek islands.

The port facility, which is located off the coast between Urla Limantepe and Urla Port, extends to the entrance of today’s pier. That means that the facility was constructed in almost the same place of today’s port, said Erkanal.

Erkanal said finding the large port facility west of today’s pier was a big surprise during underwater excavations. “We have determined through photos taken from the air that the remains of the facility were above the archaic pier. This is nearly a 400-meter long port facility which was a very big and comprehensive port during the Archaic period. There are some simple port facilities on Greek islands but this is the most developed one. We will carry out more underwater excavations in this region in March next year.”

Erkanal said they had also found a 2,600-year-old ceramic perfume bottle underwater in Urla. “Thanks to salty water in the bottom of the sea, the bottle has been preserved with minimal damage. There are hundreds of objects like this but this is in the best condition. The conditions of other objects will be seen at the end of the restoration process. We have also determined that this perfume bottle did not show the characteristics of Anatolian civilizations. Most probably, it was brought by a merchant from the Greek islands. We keep it in salty water now. The rate of salt will be reduced through time and the bottle will be exhibited in a museum.”

He said there were too many similar objects to be restored and that they had had to ask for help from volunteer organizations. “We will collaborate with them in our center because we want these precious items to be displayed in a museum as soon as possible.”

“We have reached the prehistoric period in this year’s excavations in Erythrai and found that some part of Erythrai was established on a tumulus on the coast. We estimate that the continuation of the tumulus had remained underwater as a result of the rise of the sea. We also plan to carry out an excavation in the sea next year.”

Also speaking about the Kiklat boat project of ANKÜSAM, Erkanal said, “These boats are the oldest known boat models in the Aegean Sea. They used to connect islands to each other. This project has come because of detailed pictures of ceramics found on the Kiklat islands. Based on the pictures, we have built these boat models.”