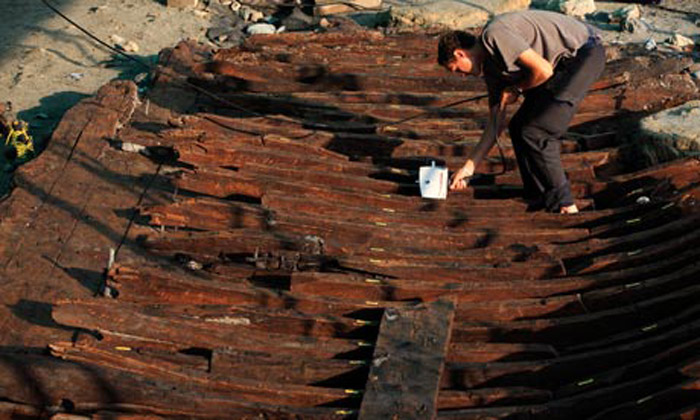 Shipwreck in ‘exceptional’ condition discovered by archaeologists in France

Sunk in the second or third century in the port at Antipolis.

It looks like the rib cage of a large marine mammal, whose bones turned black as it was fossilised. The wreck was discovered in May during a dig in Antibes, on the French Riviera, prior to construction of a car park on the site of the Roman port of Antipolis.

Archaeologists have gradually uncovered a 15-metre length of hull and structural timbers, in “exceptional” condition, according to Giulia Boetto, a specialist in ship design at Aix-Marseille University who is involved in the dig. Saw and adze marks are still visible on the wood. Luckily the ground in which it was found is always waterlogged so this prevented the timber from rotting and decomposing.

Sprinklers have kept the hull and its structure moist since its discovery. “Otherwise, in just a few weeks we would lose everything,” says Isabelle Daveau, an archaeologist at France’s Rescue Archaeology Research Institute (Inrap) and head of the project.

The ship – a merchant vessel from the imperial period – was probably about 22 metres long and six or seven metres across. It is thought to have sunk in the second or third century in the port at Antipolis. “It has a typical Graeco-Roman flat-bottomed design,” Boetto says, with a hold three metres deep and a square sail to drive it, suspended from a mast, which has not been found.

The archaeologists have made some touching discoveries, including a little 15-centimetre brush that must have been dropped by a shipwright busy caulking the hull. It most likely fell through a gap between the floor of the hold and the outer shell, only to be discovered 19 centuries later.

“A ship like this could carry a cargo of up to about 100 tonnes,” Boetto says. This may seem a lot, but it is well below the tonnage reached by other vessels. “At the time, the boats transporting Egyptian corn back to Rome could be as long as 40 to 50 metres, loaded with up to 400 tonnes of grain,” she adds.

The remains of the ship, which will be donated to Antibes by the state, will be dismantled and the timber treated for lasting conservation. “Just the process of treating the timber will take two years,” says Jean-Louis Andral, head of the Antibes museum. “Then the wreck will be reconstituted and set up in a centre for study and preservation, where it can also be seen by the general public.” It should be ready in three or four years.

How did the ship come to be lying at a depth of barely two metres in the port of Antibes? “We can’t be absolutely sure, but it’s possible, as sometimes happened, that it was deliberately scuttled to serve as a landing stage,” Daveau suggests. “It may also have been swamped by a freak wave.”

Another possible explanation is that it sank at its mooring, but this seems unlikely. Nowhere on the section of the vessel that has been uncovered have archaeologists found any signs of repairs, suggesting that it was not particularly old when it sank. In due course the timber itself will be properly dated.

The team of 20 or so archaeologists working on the dig have found no evidence of any cargo. When a ship went down, efforts would be made to salvage as much as possible. “At a depth of less than two metres it would have been fairly easy to raise goods,” Boetto says. “On the Roman shipwreck discovered in the 1970s off Madrague de Giens, at a depth of 20 metres, part of the cargo had been recovered.”

At the time underwater excavation of the great wreck, led by maritime archaeologists André Tchernia and Patrice Pomey, revealed gaps in the cargo. Heavy stones had been placed alongside the missing amphorae. It is thought that they were used to weight the divers who specialised in salvaging ship-wrecked goods. Such divers were often mentioned in ancient texts but the Madrague de Giens wreck provided the first material proof of their activity and daring.

In excavating the 5,000-square-metre site the archaeologists have uncovered more than just the remains of the vessel. The floor of the old Roman port holds a remarkable record of the diversity of sea trade between the late fourth and early sixth centuries, including amphorae dropped in the water during unloading, damaged crockery thrown overboard and the soles of leather shoes.

It is also testimony to far-reaching trade in the Mediterranean. Goods from so many different regions converged on Antipolis that “we often discover unknown objects from indeterminate sources”, Daveau says. Some finds reveal the identity of their owner. Here, for instance, is a ceramic bowl marked Rutili, probably the name of a sailor who dropped it in the water because it was broken or chipped.

Such finds are particularly valuable in the eyes of Inrap researchers as nine-tenths of the port was destroyed in the 1970s by the construction of a modern marina. In those days there was still no legislation requiring a preventive rescue dig.

All the excavated material will be kept and made available to the scientific community in appropriate premises adjoining the hall where the wreck will be on display. “We have found large numbers of amphorae from Italy and Marseille, dating back to the port’s earliest period,” says archaeologist Robert Thernot. “Then, as time passed, there were more and more items from North Africa and the eastern Mediterranean.” This suggests that the main centres of production shifted, just as is happening now with Asia’s growing importance and Europe’s industrial decline.

The cargo that the ship brought to Antipolis will probably remain a mystery but the odds are high that it would have sailed away loaded with garum, a fermented fish sauce that contributed to the prosperity and fame of the city for several centuries.