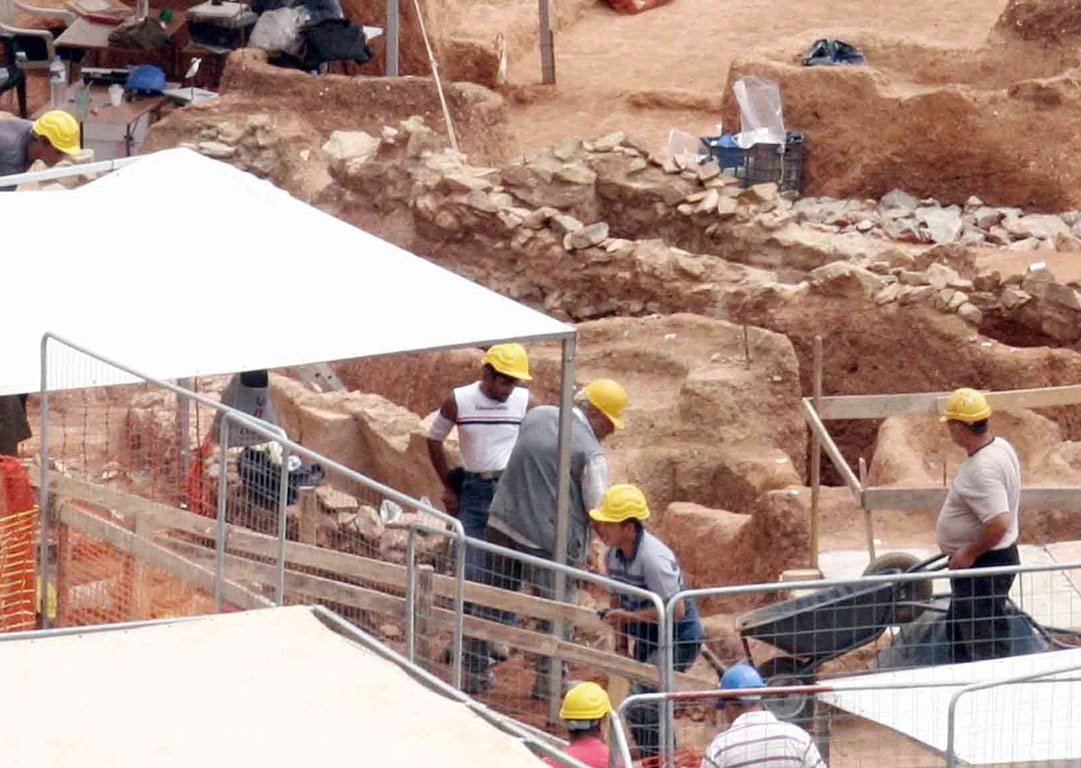 Excavations in Thessaloniki will go on for years

The excavations are undertaken by the 9th Ephorate of Byzantine Antiquities and the 16th Ephorate of Prehistoric and Classic Antiquities. According to archaeologists, the subway digging takes place in areas that have seen little subsequent building activity, which allows for all the shallow depth remains to easily come to surface and make up pieces of the city’s historical puzzle.

More particularly, the archaeological evidence retrieved from the Demokratia Station concern the suburbs of the ancient city of Thessaloniki, which served mainly as a necropolis until the paleochristian era.The ancient cemetery was built outside the western walls of the city and north of today’s main street Egnatia.The excavated area has unearthed various tombs of different size and pattern, burial offerings, jewellery, lamps, tools, coins and etc.

In the Venizelos Station area archaeologists came across the central road of the Byzantine era city and the nearby ssurroudning neighborhood blocks. Remainings from Stores and workshops have been discovered with an opening to the street for the exhibit of their products, such as jewellery and other pieces of art.

Archaeologists uncovered in the Aghia Sophia Station area a 70 m marble paved road constructed by the Romans some 1,800 years ago. The impressivel well-preserved road will be on public display once the metro works are finished.The Macro area situates the ancient city boundaries. Underneath the Roman road the experts found the remains of a road bulit by the ancient Greeks 500 years ago from that time, which reveals the city’s history over the years. “The ancient road, and side roads perpendicular to it appear to closely follow modern roads in the city today.” explained archaeologist Viki Tzanalouli to Associated Press some months ago.

The Fleming Metro Station revealed a small Roman-era cemetery (ca. 2-4th century BC) probably beloning to an ancient aricultural community residing the area. What is characteristic about this necropolis is the complete lack of burrial offerings and a unique boxlike tomb with grammic engravings amidst the remains.

Excavations in the Metro Depot in Pylaia brought to light the remains of a well-organized pre-Cassadran settling (politisma) which dates back to the early 4th to 3rd century BC. The towns which formed later on Cassander’s great city of Thessaloniki (named after his wife and Alecander the Great’s sister Thessaloniki) are also mentioned by the ancient geographer, Strabo, who lived from 67 BC until 23 AD, in his famous work “Geography”.

Excavations will go on for years

The excavations in Thessaloniki will go on for years. According to the union of workers on the Thessaloniki metro, the ending of the excavations is a matter of political decision. However the add that finds are not only innumerable mut also very important. Each day valuable treasures come to light which reconstruct the town’s history, a heritage that should be protected.