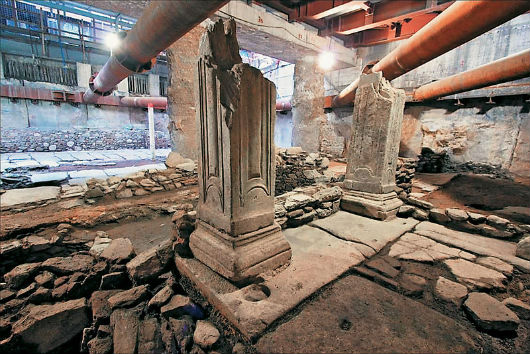 G. Boutaris: Moving the antiquities would be a crime and an insult for the city

Meeting of the municipal council of Thessaloniki

The municipal council of Thessaloniki has listened to the archaeologists and the “Attiko Metro” company representatives, and to what each side had to say about the moving or the in situ maintenance of the findings revealed during the works at the metro station “Venizelos”.

The moving of the antiquities would be a crime and an insult for the city, as the Central Archaeological Council decided, stressed the mayor of Thessaloniki, Giannis Boutaris. Mr. Boutaris stands in favor of the in situ maintenance of the antiquities and added that there is no unsolvable technical problem. “The building contractor will do what his boss says. Nor the ministry neither the city are the bosses [in this case+,” he pointed out.

He welcomed the proposal of the Aristotle University’s rector, Giannis Mylopoulos, according to which the scientific potential of the university, as a neutral observer, should examine if there is a technical solution for the co-existence of the antiquities and the metro station.

General Director of Public Works, Stratos Simopoulos, expressed his belief that the only possible technical solution is the moving of the findings. “If a responsible proposal is submitted, we are ready to listen to it. The project cannot wait any longer. We have already done enough harm upon it, we have already done enough harm to the city” he stressed.

If the realization of the metro were to be delayed for another 2-3 years, the ridership would be reduced, and this could mean that the “Venizelos” station would be abolished, said the Director of Attiko Metro, Giorgos Konstantinidis.

The need of the city’s visitor becoming part of History, by the in situ maintenance of the findings, was pointed out by the Director of the 9th Ephorate of Byzantine Antiquities of Thessaloniki, Despina Makropoulou. The findings, she added, could become the jewel of the station, the city’s attraction, tomorrow’s monument of cultural heritage.

The findings at “Venizelos” station are the “red line” of archaeologists, said the Director of the 16th Ephorate of Prehistoric and Classical Antiquities, Polyxeni Veleni. “It is our Parthenon. Would you like to see Parthenon on Mount Taygetus?”

The municipal council will decide on the matter in one of its next meetings.