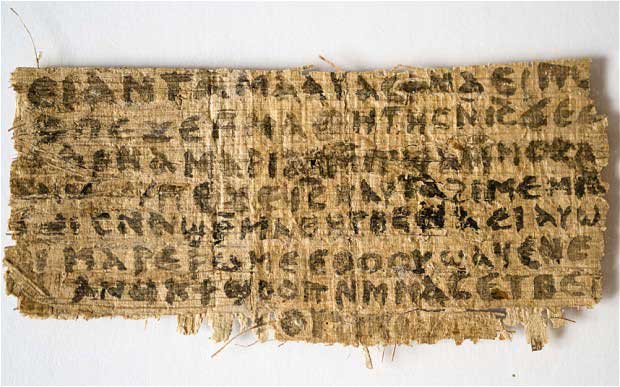 A newly-uncovered ancient papyrus shows that some early Christians believed that Jesus was married, a Harvard professor told the 10th International Congress of Coptic Studies.

Karen King, an expert in the history of Christianity, said the text contains a dialogue in which Jesus refers to “my wife,” whom he identifies as Mary.

Ms King says the fragment of Coptic script is a copy of a gospel, probably written in Greek in the second century.

Ms King helped translate and unveiled the tiny fragment at a conference of Coptic experts in Rome. She said it doesn’t prove Jesus was married but speaks to issues of family and marriage that faced Christians.

Four words in the 1.5-by-3-inch fragment provide the first evidence that some early Christians believed Jesus had been married, Ms King said. Those words, written in a language of ancient Egyptian Christians, translate to “Jesus said to them, my wife,” King said in a statement.

Ms King said that in the dialogue the disciples discuss whether Mary is worthy and Jesus says “she can be my disciple.”

Christian tradition has long held that Jesus was unmarried even though there was no reliable historical evidence to support that, Ms King said. The new gospel, she said, “tells us that the whole question only came up as part of vociferous debates about sexuality and marriage.”

“From the very beginning, Christians disagreed about whether it was better not to marry,” she said, “but it was over a century after Jesus’s death before they began appealing to Jesus’s marital status to support their positions.”

Ms King presented the document at a six-day conference being held at Rome’s La Sapienza University and at the Augustinianum institute of the Pontifical Lateran University.

While the Vatican newspaper and Vatican Radio frequently cover such academic conferences, there was no mention of Ms King’s discovery in any Vatican media on Tuesday. That said, her paper was one of nearly 60 delivered on Tuesday at the vast conference, which drew 300 academics from around the globe.

The fragment belongs to an anonymous private collector who contacted Ms King to help translate and analyse it. Nothing is known about the circumstances of its discovery, but it had to have come from Egypt, where the dry climate allows ancient writings to survive and because it was written in a script used in ancient times there, Ms King said.

The unclear origins of the document should encourage people to be cautious, said Bible scholar Ben Witherington III, a professor and author who teaches at Asbury Theological Seminary in Wilmore, Kentucky. He said the document follows the pattern of Gnostic texts of the second, third and fourth centuries, using “the language of intimacy to talk about spiritual relationships.”

“What we hear from the Gnostic is this practice called the sister-wife texts, where they carried around a female believer with them who cooks for them and cleans for them and does the usual domestic chores, but they have no sexual relationship whatsoever” during the strong monastic periods of the third and fourth centuries, Mr Witherington said. “In other words, this is no confirmation of the Da Vinci Code or even of the idea that the Gnostics thought Jesus was married in the normal sense of the word.”

These kinds of doubts, Ms King said, should not stop scholars from continuing to examine the document.

Those who conducted initial examination of the fragment include Roger Bagnall, a papyrologist who’s the director of the New York-based Institute for the Study of the Ancient World, and Annemarie Luijendijk, a scholar of the New Testament and early Christianity from Princeton University. They said their study of the papyrus, the handwriting and how the ink was chemically absorbed shows it is highly probable it’s an ancient text, Ms King said.

Another scholar, Ariel Shisha-Halevy, professor of linguistics at Hebrew University and a leading expert on Coptic language, reviewed the text’s language and concluded it offered no evidence of forgery.